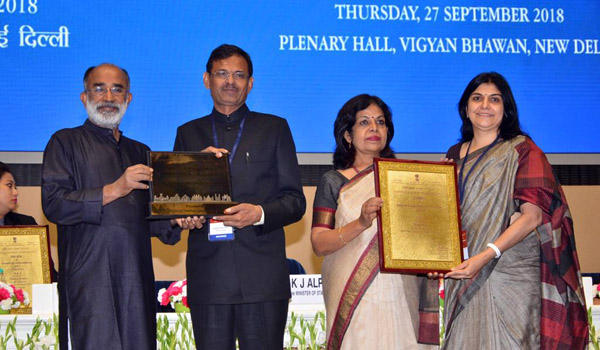 Jaipur: Rajasthan tourism department is increasingly using technology and social media to promote tourism in the state. The efforts paid off as Rajasthan bagged three awards in the National Tourism Awards 2016-2017 on Thursday.

Executive Chef at Hotel Rambagh Palace Ashish Kumar Rai was awarded the Best Chef of India Award in the categories of 4 and 5 Star Deluxe, Heritage classic, and grand hotels.

The award ceremony was organized in Delhi and the awards were presented by the union tourism minister K.J Alphons.

The National Tourism Awards 2016-2017 were organized at the Vigyan Bhavan of New Delhi on the occasion of World Tourism day 2018. The awards were given in various segments including Travel, Tourism and Hospitality.

Kuldeep Ranka said that the state has aggressively used the marketing and IT to attract tourists.

Andhra Pradesh got the first prize in the state category of comprehensive development of tourism. Kerala bagged the second prize while Rajasthan and Goa jointly shared the third prize.

The awardees were chosen on the basis of several parameters including tourist footfall, initiative of the state government and policies taken to make the state tourist friendly.

K.J Alphons was the chief guest in the event. Addressing the gathering, the minister said that the tourism sector has generated 14.62 million jobs in the country in the last four years. There was a growth of more than 14 % in number of foreign tourist arrivals last year.