Ankur Padia was presented in the court on Wednesday in connection with the kidnapping of seven-year-old Rudraksh and subsequent murder of the boy in 2014. 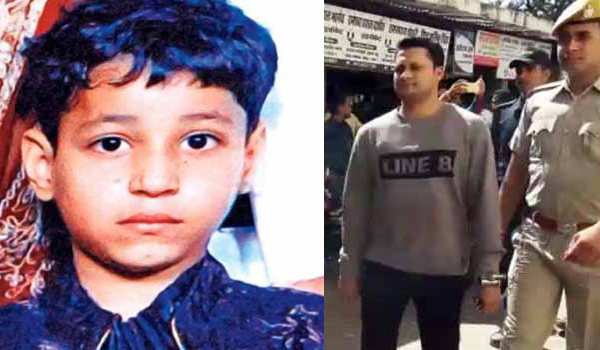 Jaipur: The SC/ST court of Kota on Wednesday upheld the capital punishment for Ankur Padia, the main accused in the infamous Rudraksh kidnap-murder case that rocked Kota in 2014. The court dismissed his plea that sought relief from the death penalty. The court had conducted a re-hearing of the case in compliance with the Rajasthan high court directions.

Ankur Padia was presented in the court on Wednesday in connection with the kidnapping of seven-year-old Rudraksh and subsequent murder of the boy in 2014.

The court during the hearing upheld the death sentence awarded to Padia in February 2018.

The high court had put a stay on the death penalty in September and asked the trial court to re-hear the case within three months.

The SC/ST court upheld the execution of accused Ankur Padia and dismissed his appeal seeking relief from death penalty.

According to the police, Rudraksh was playing in a park on October, 2014 when he was kidnapped by Ankur. Ankur then started calling up the boy’s parents using different numbers demanding a ransom of Rs 2 crore. But when the parents informed the family members, Ankur killed the body and dumped his body in the Jakhmund canal.

The accused for the murder of 7-year-old boy included Ankur Padia, his brother Anoop, a domestic help Mahaveer and another accused Karanjeet. They were produced in the special SC/ST court under heavy security on February 26. The court reached a verdict and handed the capital punishment to Ankur and Mahaveer was sentenced to 4-year imprisonment, while Karanjeet two years. Ankur appealed in high court related to this.