She slashed her hand’s veins and then consumed some sleeping pills. Some student leaders rushed her to SMS Hospital where she is undergoing treatment. Her condition is stated to be stable. 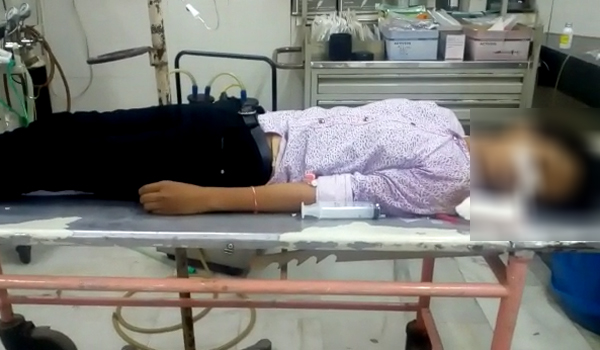 Jaipur: A girl, identified as Poonam Soni, attempted suicide outside the administration block of Rajasthan University (RU) on Wednesday. A student third year honors student of Maharani College, Poonam slashed her hand’s veins and then consumed some sleeping pills. Some student leaders rushed her to SMS Hospital where she is undergoing treatment. Her condition is stated to be stable.

The girl was reportedly depressed as she couldn’t clear two of the four papers in economics stream. She had been coming to the university with a plea that she fared poorly despite she expected good marks in all the papers.

When no one paid heed to her plea, she slit her hand veins and then consumed sleeping pills.

Some student leaders were outside the admin block. When they saw the girl, they rushed her to SMS Hospital.

“She is out of danger now. We found some sleeping pills in her possession. She had consumed a lot of them,” said a doctor.

The student leaders protested outside the admin block after the girl’s suicide attempt news spread like wildfire.

They alleged that the RU administration is not paying heed to the problems of students, forcing them to take such drastic steps.

“The girl had approached RU administration several times, but her pleas fell on deaf ears. This is why she attempted suicide,” said a student leader.

Police force was deployed in the university following the incident. Many complaints of discrepancies in the examination results have been reported in the recent past. The majority of BSc students failed in the exam recently. The matter was brought to the notice of higher education minister Kiran Maheshwari.