The Ambani and Piramal Family will reach Udaipur in special charter planes on December 8 along with guests. 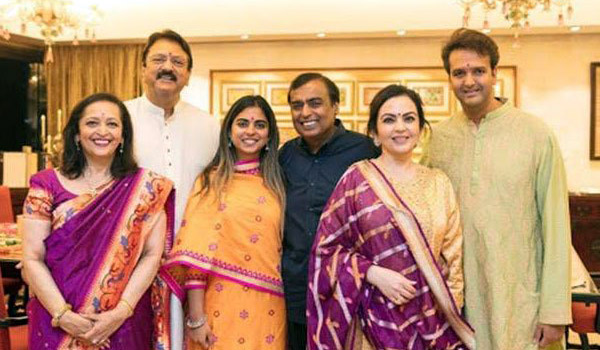 Jaipur: Pre-wedding ceremonies of industrialist Mukesh Ambani’s daughter Isha Ambani will be held in the Lake City Udaipur in Rajasthan on December 8 and December 9. The preparations have begun for these ceremonies. The couple will tie the knot at Mumbai on December 12.

More than 400 heritage and luxurious cars have been brought in from different states including Maharashtra, Delhi, Haryana, Gujarat, and Rajasthan for guest’s convenience in Udaipur. A team of 80 professional photographers has been called to Udaipur to cover the event.

The Ambani and Piramal have booked all the 5-star hotels of Udaipur for guests. The pre-wedding ceremonies will happen at the City Palace and The Oberoi Udaivilas of Udaipur. Security teams will be deputed around the venue for two days of celebrations.

According to the reports, around 200 chartered planes are scheduled to land and take off from the Udaipur airport over the course of this week due to the wedding and Rajasthan assembly election polls on December 7.

The engagement ceremony of the couple was held at Lake Como in Italy earlier this year. More than 600 guests attended the celebrations. As per sources, the guests’ list will be much longer for the pre-wedding ceremonies at Udaipur.

The Ambani and Piramal Family will reach Udaipur in special charter planes on December 8 along with guests.

Earlier this year, the official invitation from the Ambani’s family mentioned, “We are delighted to share that the marriage of Isha Ambani and Anand Piramal will take place in the residence of Shri Mukesh Ambani and Smt. Nita Ambani in Mumbai with family members and close friends on 12th December, 2018. The ceremonies will be performed in accordance with Indian traditions, customs, and culture. During the weekend prior to the wedding, the Ambani and Piramal families will host their friends and family in Udaipur, where they are partnering with artisans and craftsmen to integrate local culture and traditions into the festivities”.