Raju killed Kamal as he wanted to develop a relationship with the victim’s wife and considered him as a hindrance, commissioner of police (Jaipur) Sanjay Agarwal said. 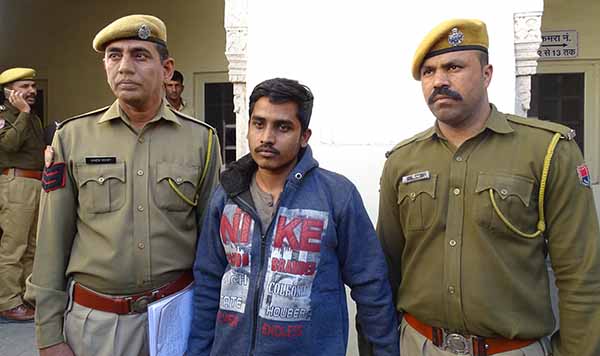 The man arrested for murder on VT Road near Shiprapath police station.

Jaipur: The city police on Monday arrested a man, identified as Raju for brutally killing 26-year-old Kaman Barman, a cook, and then setting his body on fire near Shipra Path police station building five days ago.

Raju killed Kamal as he wanted to develop a relationship with the victim’s wife and considered him as a hindrance, commissioner of police (Jaipur) Sanjay Agarwal said. Raju allegedly used petrol from his bike, poured it on Kamal’s body and then set it afire to hide his identity.

The accused was held from Jodhpur.

“The victim’s father-in-law registered an FIR with the police stating that Kamal had left home with his friend Raju around 9 pm on January 10. Kamal didn’t return home that night. The family was informed by the police about the dead body of Kamal that was found in Shipra Path area,” said Agarwal.

An FIR was registered and the police under the supervision of DCP, south Yogesh Dadich launched an investigation. Police teams were rushed to Jodhpur and West Bengal.

Raju alias Linton Vishwas was held from Jodhpur and brought to the city for interrogation. He allegedly confessed to the crime following which he was booked for homicide.

Commissioner Agarwal said that Raju had a criminal record. He had molested a minor girl and a case was registered against him with Muhana police station.

“Due to his criminal activities, his wife divorced him. He wanted to develop a relationship with his friend Kamal’s wife and wanted to get rid of him. He took the victim with him to an unoccupied plot and made him have liquor. He then hit him with an iron rod and set his body on fire using petrol from his bike. He was to leave for his native village in West Bengal when the police held him,” said the officer.

The murder had embarrassed the city police as it happened hardly 400 meters from the police station building. The commissioner removed the SHO and six others and suspended two policemen for alleged negligence.