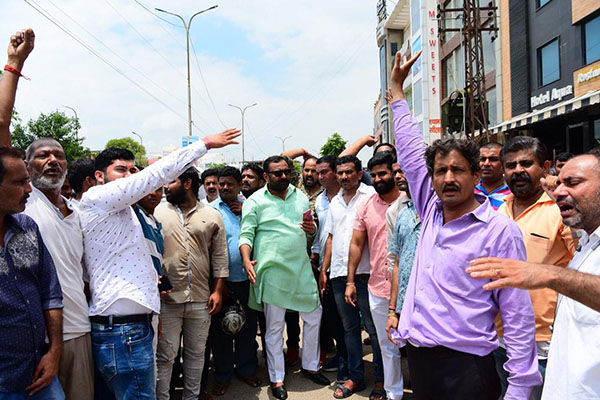 People protesting demanding action in the case of suicide by a rape victim at Vaishali Nagar police station.

Jaipur: Two days after a rape victim committed suicide by setting herself on fire at Vaishali Nagar police station, the Jaipur police comssionerate put station house office (SHO) Sanjay Godara on awaiting posting orders for alleged negligence. The case will now be investigated by CID, CB. The traders kept the markets closed in protest of the incident. The National Women’s Commission has also taken cognizance in the matter. A team will soon visit Jaipur.

The rape victim succumbed to burn injuries early on Monday. She accused policemen of not taking action against the man who raped her even a month after she lodged an FIR. She was undergoing treatment at SMS Hospital with over 75% burn marks.

The woman’s husband threatened that he and his son would commit suicide outside Vaishali Nagar police station if the man who raped his wife was not arrested.

The woman, a resident of Kachan Vihar area in Jaipur, had registered an FIR one Ravindra Singh, belonging to Fatehpur Shekhawati about a month ago. The woman in the FIR stated that her husband was posted in army. Ravindra had come to her house with her husband nearly four years ago. Her husband went to Jammu and Kashmir on duty, but Ravindra kept visiting her house in his absence. Ravindra took her to the house of his friend one day on some pretext and made her have cold drink laced with drugs. He then raped her.

Some Rajput community organizations including Karani Sena staged protests against the incident at several places in Vaishali Nagar and Khatipura. The local traders associations called for a bandh following which the shops remained closed in most markets in these areas.

The issue was raised in the state assembly also. Minister Shanti Dhariwal said that the police had called the accused in the case for interrogation. He claimed innocence and told the police that their relationship was consensual. The police were also provided evidence to this effect.