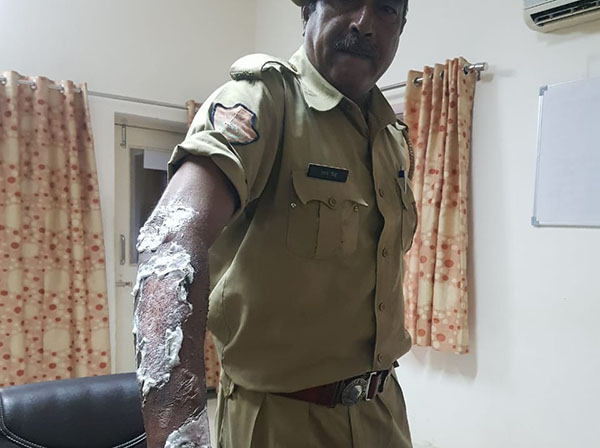 Vaishali Nagar police constable who sustained burn injuries while attempting to rescue a rape victim. She attempted suicide by setting herself on fire on police station premises.

Jaipur: The rape victim who attempted suicide at Vaishali Nagar police station by setting herself afire over alleged police inaction succumbed to burn injuries early on Monday. The woman who accused policemen of not taking action against the manwho raped her even a month after she lodged an FIR was undergoing treatment at SMS Hospital with over 75% burn marks. The family members demanded action against police officials after the woman’s death.

The woman, a resident of Kachan Vihar area in Jaipur, had registered an FIR one Ravindra Singh, belonging to Fatehpur Shekhawati about a month ago. The woman in the FIR stated that her husband was posted in army. Ravindra had come to her house with her husband nearly four years ago. Her husband went to Jammu and Kashmir on duty, but Ravindra kept visiting her house in his absence. Ravindra took her to the house of his friend one day on some pretext and made her have cold drink laced with drugs. He then raped her.

The woman visited the Vaishali Nagar police station almost daily after registering the FIR demanding action against the accused, but she alleged that the police officials were supporting the accused, not her. They accused her of registering a bogus complaint and pressurized her to withdraw the case. They even allegedly misbehaved with her.

The woman came to Vaishali Nagar police station along with her 13-year-old son. She set herself afire on the police station premises. The son started crying for help. A constable, Amar Singh, sustained serious burns while trying to rescue the woman.

She was rushed to the burn ward of SMS Hospital where doctors declared him around 5 am on Monday.