The video shows the man, identified as Jogendra Choudhary, pushing the woman’s head and hitting it on the wall. The man was helping the mother with urination and beating her up at the same time.

Video of man beating up his mother goes viral.

Jaipur: A video showing a man beating up his disabled elderly mother went viral on social media on Friday. The man was helping the mother with urination and beating her up at the same time, supposedly frustrated over having to clean up. The alleged incident took place in Shahjanhapur area of Alwar district 15 days ago. The woman suffering from paralysis died nearly two weeks ago and when the rituals of her death finished, the video was uploaded on social media sites. It was made allegedly by a relative living in the neighborhood. The police are trying to find the son who has disappeared, according to preliminary reports. 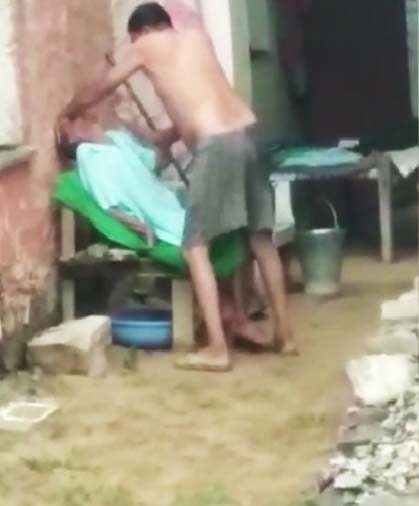 Mother being beaten up by son. Video grab.

The video shows the man, identified as Jogendra Choudhary, pushing the woman’s head and hitting it on the wall. The woman was shown pleading with the son not to harass her. Jogendra and his wife are government teachers. The police have conducted a preliminary investigation after the matter came to their knowledge. A team was sent to the house and found the spot where the man is beating up his mother. The video shocked the social media users. They condemned the abuse. A similar video showing a father beating up his two children led to an outrage throughout the country earlier this week. The video originated from Devgarh area of Rajsamand district in Rajasthan and showed the man - Chain Singh – hang his five-year-old son from a hook, stripped him necked and beat him up severely with a stick. He also beat up his 4-year-old daughter to such an extent that she fell unconscious. The father was punishing the two children for eating dirt and bed-wetting, according to the police. The man was arrested under various sections of the IPC including 307 (attempt to murder) after the state child welfare committee took cognizance of the video and registered a complaint with the police. The man’s uncle, Vanna Singh, who shot the video with his cell phone was also arrested.
Follow @ThePinkcityPost