The man’s brother also held. The father, identified as Chain Singh, striped his son and then hanged him from a hook. Also beats daughter Puja with a stick 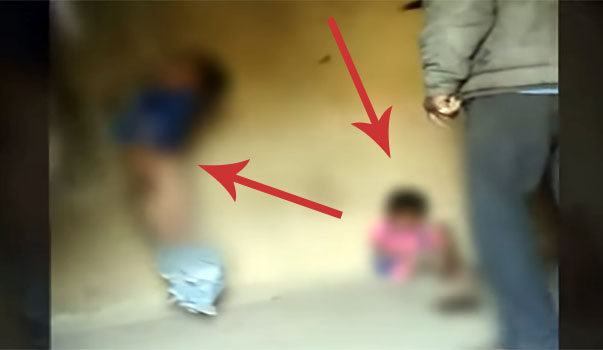 Jaipur: A man was arrested after a video showing him brutally beating up his children went viral. The man, Chain Singh – a native of Devgarh area in Rajsamand district – was arrested under various sections of the IPC including 307 (attempt to murder) after the state child welfare committee took cognizance of the video and registered a complaint with the police. The man’s uncle, Vanna Singh, who shot the video with his cell phone was also arrested.

The video shocked everyone who watched it. Chain Singh hanged his five-year-old son from a hook, stripped him necked and beat him up severely with a stick. He also beat up his 4-year-old daughter to such an extent that she fell unconscious. The father was punishing the two children for eating dirt and bed-wetting, according to the police.

The video outraged people who pleaded for a strict action against the father. Many social media users said that they started crying after watching the video. 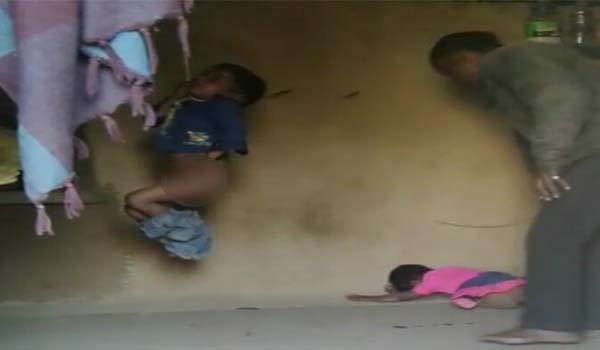 Video grab of father abusing children in Rajsamand of Rajasthan

“The video was shot by Chain Singh’s brother on Sunday. It went viral on Tuesday after he shared it with a couple of people,” said a police officer.

The 35-second video shows Chain Singh taking turns in beating up his son, identified as Lalit and then daughter, Lajvanti alias Puja with a stick.

Both the children kept crying hysterically. Puja fell to the ground and was almost unconscious.

“The uncle had shared the video on social media from there it went viral across the country,” said the officer.

When the matter came to the notice of the child welfare committee, a team visited the spot. When it was found that the incident actually happened, they registered an FIR with the police.

According to the preliminary police investigation, the children’s mother Dalidevi was also in the house when Lalit and Puja were being tortured.

The mother told the police that the children were eating dirt and bed-wetting even after being warned several times. The father wanted to teach them a lesson.

Chain Singh said that he just wanted his children not to have bad habits.

“Please forgive me. I won’t do this again,” Chain Singh pleaded before the media persons.

After the incident mother said that she would commit suicide if her husband was arrested.

Chain Singh was a liquor salesman and also active in local politics.