Amid the Congress party’s allegations that public resources are being wasted on the rally, the Rajasthan government has roped in the entire administrative machinery to ensure that the PM’s visit is a huge success. 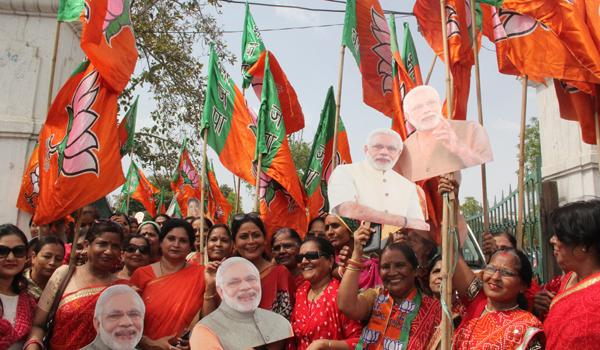 BJP workers gear up for PM Narendra Modi's visit to Jaipur on July 7.

Jaipur: Recently held by-elections in Ajmer, Alwar and Mandalgarh constituencies had been a major setback to the BJP in Rajasthan. Many senior party leaders believe that the anti-incumbency was a key factor behind the BJP’s humiliating defeat just a few months before the assembly elections.

Now the party’s state unit has pinned all its hopes on Prime Minister Narendra Modi’s visit to Jaipur on July 7. With the public rally, the BJP is planning to launch the election campaigning. The BJP is leaving no stone unturned to use it for warding off the anti-incumbency factor.

Amid the Congress party’s allegations that public resources are being wasted on the rally, the Rajasthan government has roped in the entire administrative machinery to ensure that the PM’s visit is a huge success.

Narendra Modi will address a gathering of over 2 lakh people, the majority of them to be the beneficiaries of the union and state government’s various schemes. All the MLAs will be in audience.

The venue of the public meeting has been turned into a fortress with unprecedented security arrangements. Apart from the security cover provided to the PM by SPG, the state police will depute about 8,000 police personnel. Ten companies of RAC will also stand guard to respond to any emergency situation. Armed police personnel will be deputed at commercial and residential buildings overlooking the airport, SMS and Amroodon Ka Bagh. Jaipur police commissionerate has also imposed section 144 of CrPC to ban gathering of five or more people in areas close to the venue. 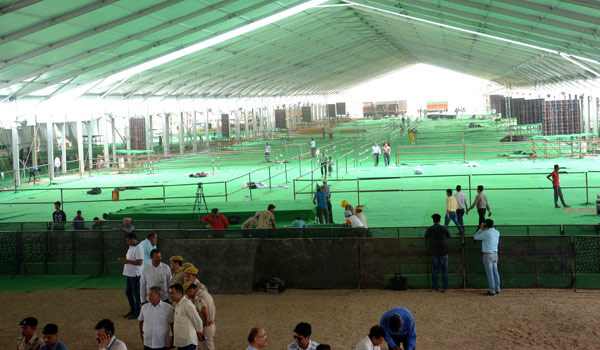 Rajasthan police’s intelligence agencies have also been put on high alert keeping in view some organizations’ plan to stage demonstration and protests.

At the forefront of the organizations planning protests is Karani Sena  that is accusing the government of betrayal to the Rajput community. Karani Sena district president Shravan Singh Sirohi told media persons that July 7 will be observed as ‘Black Day’.

“The government has betrayed the community in cases of Anandpal Singh and Chatar Singh Sodha police encounters. The government also slapped bogus cases on community workers in the matter of protest against movie Padmavat,” said Shravan Singh.

“The BJP is wasting public’s money to gain political advantage. Entire government machinery has been roped in to make the rally a success, causing public words to come to standstill,” said Pilot.

He said that the government has gone to the extent of banning sale of ‘black clothes’ because some organizations were planning to wear them to protest against the PM’s rally.

“It’s an attack on the democracy,” Pilot said.