Newborn’s mother Sapna was inspired by WG Abhinandan’s bravery. She said that she will send his son to Indian Air force (IAF) and her son will serve the country like Abhinandan did. 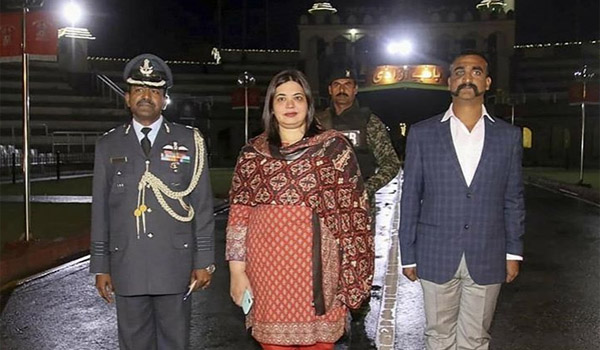 IAF Wing Commander Abhinandan Varthaman during his homecoming on Friday at Wagah border.

Jaipur: Amid the celebrations in the country over the homecoming of IAF Wing Commander Abhinandan Varthaman on Friday night, a family in Alwar district of Rajasthan named their baby boy as ‘Abhinandan’. Newborn’s mother Sapna was inspired by WG Abhinandan’s bravery. She said that she will send his son to Indian Air force (IAF) and her son will serve the country like Abhinandan did. Read also: Jaipur: Jhotwara police arrest man for objectionable Facebook comment against IAF WC Abhinandan Sapna is a resident of Kishangarh Bas of Alwar district. She delivered the baby on Friday when the IAF Wing commander was returning to India after spending two days in Pakistan’s custody in the aftermath of exchange of aerial strikes between the two countries. Newborn baby boy’s grandfather Janesh Bhutani is the former Sarpanch of Kishangarh Bas. He said that while watching the news of Wing commander Abhinandan return to India on TV on Friday, they decided to name his grandson Abhinandan in appreciation of the IAF commanders’ bravery. He also wants his son to serve the nation after growing up and to make the nation and family proud like WG Abhinandan Vardaman did. IAF wing commander Abhinandan Varthaman returned to India on Friday night at around 9:35 pm. The whole country celebrated the occasion in different ways. A huge crowd gathered at Wagah border where Abhinandan walked into India amid high security. Social media platforms are still flooded with pictures and videos of his bravery and his return to the nation safely. An army jawan from Nagaur district of Rajasthan had named his newborn as ‘Mirage Singh Rathore’ to celebrate the aerial strike carried out in PoK in the aftermath of Pulwama attacks. The baby boy was born when the air strike was being carried out by IAF on February 26.
Follow @ThePinkcityPost