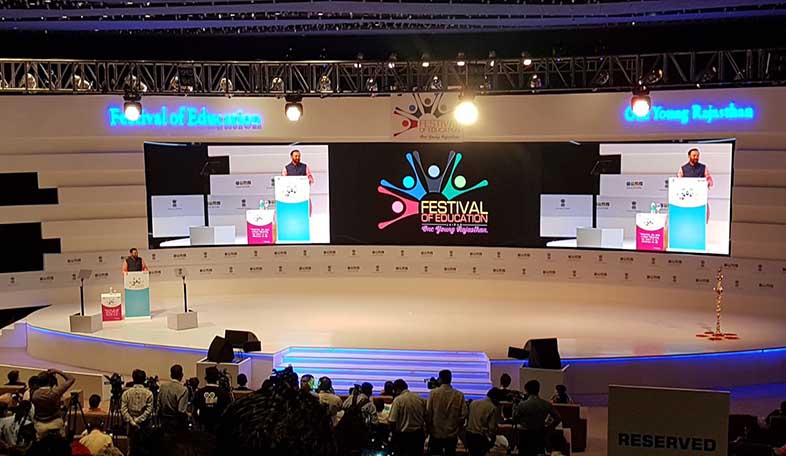 Prakash Javdekar speaking at Festival of Education in Jaipur.

Jaipur: Union Human Resource Development minister Prakash Javadekar said here on Saturday that unemployed youths are applying for a sweeper’s job in the country after completing their post-graduation.

Javadekar was addressing the inaugural session of Jaipur Festival of Education being organized by the Rajasthan government at Jaipur Exhibition and Convocation Center in Sitapur.

Javadekar said it highlighted the worrying state of education and career prospects in the country. Javadekar clarified he didn’t mean to say a sweeper’s job wasn’t a dignified one, but a person should be able to get a job according to his or her education and skills.

He stressed upon the need for skill development among students, so that they could carve their own future.

Javadekar said that India was the only country where more than 100 million children are being provided mid-day meals at schools daily.

Experts from India as well as overseas will highlight the challenges in the education sector. They will also discuss with the government how it should get updated in terms of the latest technology and teaching methods to overcome these challenges.

Chief minister Raje also inaugurated ‘Gyan Sankalp’ portal. Raje also announced setting up of a fund meant to collect donations from corporates and NGOs as part of their corporate social responsibility. The funds will be used for the betterment of education in the state. The donation amount would be tax-free under section 80 of Income Tax Act.

Bollywood superstar Akshay Kumar is set to steal the show with his appearance at 5.30 on Saturday. He would interact with the audience for nearly an hour. Actress and social activist Shabana Azmi will also interact with students.

The festival aims at having a face-to-face interaction with the innovations and new cutting-edge technologies in education sector across the world so that these could be adopted here and Rajasthan could attract newer heights in the field, chief minister Raje said.