The two men - Gulab Singh and Sushil Kumar - were arrested from Palam area in New Delhi. The police, however, could not recover the gold. Police said that the kingpin of the gang, Manish Singh alias Ranveer Singh is still at large 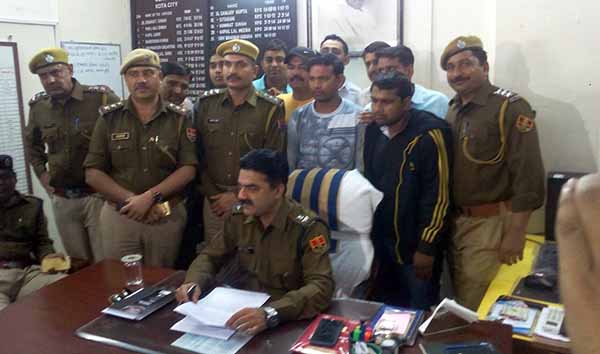 Jaipur: Exactly a month after robbers barged into Manappuram Gold Loan Finance Company’s building in Nayapura area of Kota in broad daylight and made away with about 27 kg of gold, the Kota police on Wednesday arrested two of the criminals. The two men – Gulab Singh and Sushil Kumar  – were arrested from Palam area in New Delhi. The police, however, could not recover the gold. Police said that the kingpin of the gang, Manish Singh alias Ranveer Singh is still at large.

Nearly 20 police teams – consisting of 200 policemen were formed after the robbery, said SP, Kota Anshuman Bhomia. Barricades were put up at all exit roads. The police studied the footages of CCTVs installed in the Mannapuram Gold Loan office and on highways, toll plazas and other nearby cities. The police got clues about the vehicles used in the robbery after studying the registration numbers of more than 4000 vehicles that passed through the toll plazas. On the basis of this investigation, a massive hunt was launched for the robbers in six states including Rajasthan, Uttar Pradesh, Madhya Pradesh, Bihar, Maharashtra and Delhi, SP Bhomia said. More than 70 police teams were involved in the manhunt.

Meanwhile police came to know that the robbers had stayed at one more place in Talwandi area of Kota before committing the loot. The police collected details from more than 3500 hostels, houses, hotels and commercial buildings and studied footages from over 1200 CCTVs in the area to identify the place.

On the basis of this investigation, the police rounded up two men – Gulab Singh and Sushil Kumar – Mahaveer Enclave in Delhi. The police came to know that the robbers had rented five different places in Delhi also.

“We also came to know that a Hundai car had been used by the robbers. It was traced to Gulab Singh. The car had been paid for by Sushil Kumar,” said Bhomia.

He added that the two accused were staying at the same place in Delhi.

“Efforts are on to recover the gold and the car used in the robbery,” said the officer.

The mastermind in the robbery is one Manish Singh alias Ranveer Singh, a resident of Bihar. He is the brother-in-law of Sushil Kumar.

On January 22, the armed robbers forced employees and customers into a room and snatched away their mobile phones. They beat up the manager and forced him to open the lockers. They then stuffed the gold into bags and made away with it. The gold was worth nearly Rs 8 crore.