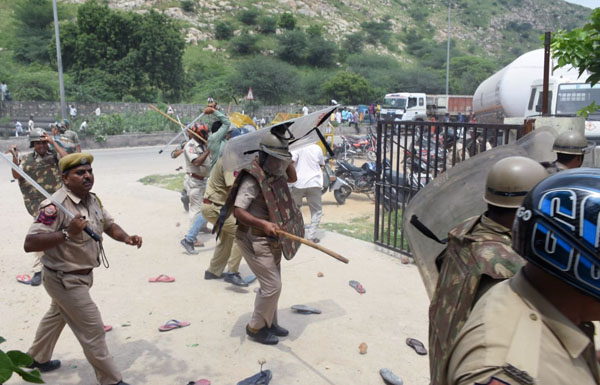 Jaipur: SHO of Kho Nagorian police station Virendra Singh was suspended for lathicharging people who were protesting against the murder of a newspaper hawker on Thursday.

It was alleged that the use of force by the police was unwarranted and the policemen lathicharged the victim’s wife and relatives who had gone to the police station for lodging an FIR in the matter. Former BJP MLA from Bagaru Kailash Varma and MLA Kanhaiya Lal Meena were also manhandled by the police during the protest.

The hawker was murdered in Shankar Vihar Colony. The victim, identified as Mannu Vaishnav, had gone to accused Rafeeq’s house asking for the payment for newspaper subscription. Mannu delivered newspapers at Rafeeq’s house, but the later was not paying for them for the past few months. When Mannu asked him to pay for the newspapers on Friday, Rafeeq attacked him with an axe. Mannu was seriously injured and rushed to a nearby hospital where the doctors declared him brought dead. Some local residents who witnessed the incident caught Rafeeq and thrashed him. They then handed him over to the police.

Some BJP leaders reached the police station with their supporters demanding suspension of the SHO, Rs 10 lakh compensation for the family members of the victim and a government job to the kin. The traffic on the Agra and Tonk highways was blocked for several hours.

The government announced a compensation of Rs 5 lakh and suspended the SHO following the protest was called off late evening.

The journalist associations have also threatened of an agitation as a photo journalist was beaten up by the policemen.