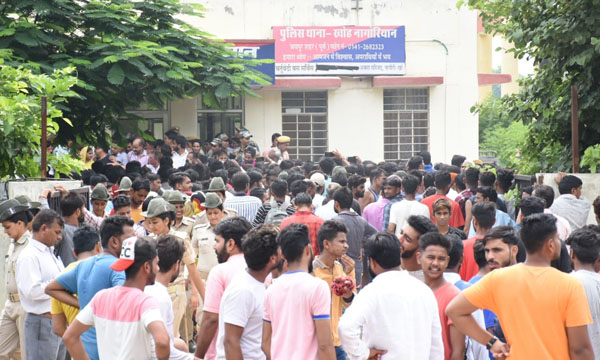 Jaipur: A hawker was brutally murdered by a man when the victim demanded the money for monthly subscription of newspapers from him in Kho Nagorian area of the city on Thursday. The accused axed the victim to death in a fit of rage. The local residents caught the accused man and handed him over to the police after beating him up. As the news spread in the area, people gathered outside Kho-Nagorian police station and demonstrated.

The incident took place in Shankar Vihar Colony. The victim, identified as Mannu Vaishnav, was a resident of the colony and worked as a hawker. The accused, Rafeeq, is the victim’s neighbour. Mannu delivered newspapers at Rafeeq’s house, but the later was not paying for them for the past few months. When Mannu asked him to pay for the newspapers on Friday, Rafeeq attacked him with an axe.

Mannu was seriously injured and rushed to a nearby hospital where the doctors declared him brought dead. Some local residents who witnessed the incident caught Rafeeq and thrashed him. They then handed him over to the police.

Senior police officers rushed to the spot and placated the protestors. The officials assured them of strict action and a speedy investigation in the case.