Sampat Nehra was arrested by Haryana police STF from Andhra Pradesh. Sampat Nehra is allegedly one of the shooters who barged into a gym in Sriganganagar last month and shot dead history sheeter Jordan Choudhary last month. 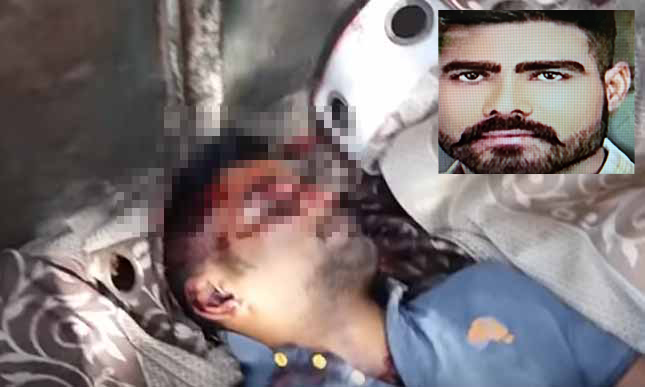 Sampat Nehra (in inset) - one of the main accused in Jordan murder case arrested.

Jaipur: In a major breakthrough in the Jordan murder case, one of the main accused – Sampat Nehra – was arrested by Haryana police STF from Andhra Pradesh on Thursday. Sampat Nehra is allegedly one of the shooters who barged into a gym in Sriganganagar last month and shot dead history sheeter Jordan Choudhary. The Rajasthan police have heaved a sigh of relief with the arrests. They have been trying to trace the criminal since the murder took place and were providing intel to their counterparts in Punjab and Haryana.

Sources in Rajasthan police said that Sampat Nehra was picked up from an undisclosed location in Andhra Pradesh by the Haryana police special task force (STF).

He was being brought to Haryana till the reports last came in. A team of Rajasthan police is already camping in Haryana. Sources said that Sampat Nehra will be interrogated as to ascertain the whereabouts of another accused, Ankit Bhadu, who was also involved in the daredevil murder.

Both Ankit Bhadu and Sampat Nehra are members of the Punjab-based Lawrence Bishnoi gang.

A massive manhunt had been launched for them when their name cropped up in the murder of Jordan Choudhary, a history sheeter in Sriganganagar. Jordan was shot dead by three men while he was working out at Metallica Gym & Spa on Meera Marg in Sriganganagar. A postmortem examination has revealed that 16 bullets pierced his body. Six bullet injuries were found on his chest, three each on head and stomach and four on his hands.

Rajasthan special operations group (SOG) had launched an investigation into the murder of Jordan alias Vinod Coudhary on suspicion of the involvement of an interstate gang.

People claiming to be Sampat Nehra and Ankit Bhadu were making extortion calls to traders in Sriganganagar after the murder.