The car of deputy director (revenue) Ummed Singh – a Rajasthan administrative service (RAS) officer – was stolen in Lalkothi area, a few meters from the police headquarters (PHQ) building on Wednesday. 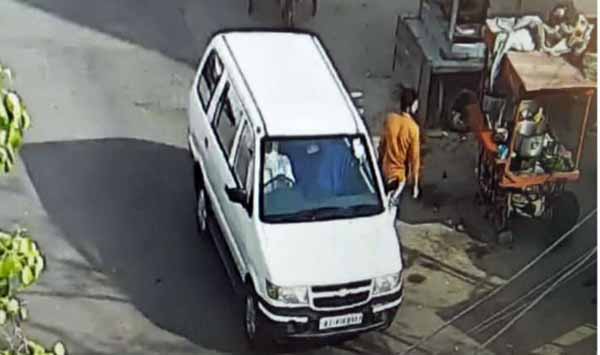 The car of an ACB officer being stolen by thieves. CCTV footages.

Jaipur: The car of deputy director (revenue) Ummed Singh – a Rajasthan administrative service (RAS) officer – was stolen in Lalkothi area, a few meters from the police headquarters (PHQ) building on Wednesday. The incident has embarrassed the police as it is the second incident of a vehicle belonging to a senior officer being stolen in a span of 15 days. Unidentified thieves had stolen the car of an IPS officer from outside the chief secretary’s bungalow. The incident which was caught on a CCTV took place around 8 am on Wednesday. Ummed Singh’s driver – Vidhyadhar Kumar – had parked the car in the parking of a hotel near Laxmi Mandir on Tonk Road. He was on his way to pick the officer from his house in Sun City in Jhotwara area. He stopped near Lalkoti vegetable market to buy vegetables. He had packed the vegetables in two bags. Since they were heavy, he walked the car carrying one of them and put it in the vehicle. He left to bring the second bag and when he came to parking carrying it, he found the car missing. He immediately informed the police control room and Ummed Singh. The CCTV footages showed that there were two thieves. While one of them was keeping an eye on the road, the other got into the car and drove it away. On May 15, unidentified thieves stole the car of Intelligence Bureau (IB) IG KC Meena from outside the official residence of the Rajasthan chief secretary in Jaipur. The IG’s driver Vinod has registered an FIR with Moti Dungari police station in this regard. Vinod stated in the complaint that he had parked the car outside the CS bungalow and went to the public toilets situated nearby. When he returned, he found the cars missing. He tried to find the car on his own for a few minutes and then informed the police around 8 am.
Follow @ThePinkcityPost