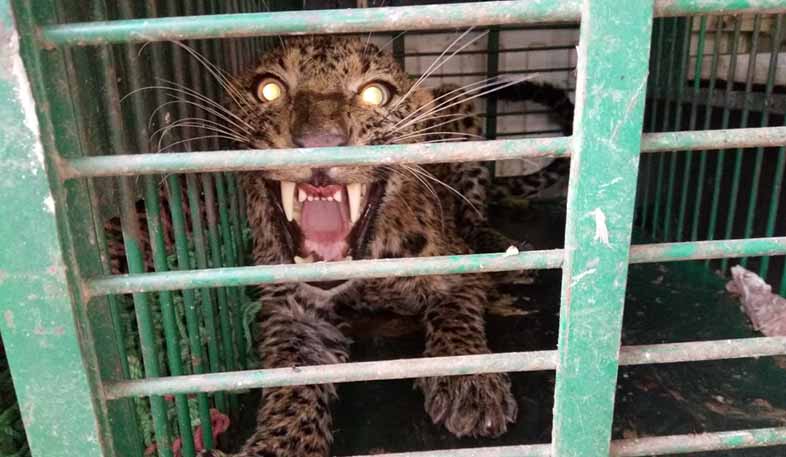 Jaipur: A panther of Jhalana forest area fell into 80 feet deep well located in the Risar forest range of Jaipur, however, survived due to efforts of a rescue team. The panther is now safe and has been released into the jungle. No serious injuries were found on his body.

According to Dr. Arvind Mathur, senior veterinary officer of the Nahargarh Biological Park, the panther is about 2 years old and is safe now. The rescue team arrived at the location on time and after rescuing the panther provided medical care. Usage of the first-aid kit by the team made sure the male breed animal recovered from the incident.

The incident of this panther trapped in a deep well was reported on Sunday. The rescue team arrived on time and started the rescue operation after which the procedure to ensure its safety was carried out. Once the team was satisfied that the animal was in a good condition it was freed into its habitat. Essential medicines were given so that the panther would recover soon from this incident.

Nahargarh Biological Park is a part of Rajasthan’s adventure tourism plan. Located on the Jaipur-Delhi highway, this park is in the vicinity of the famous Nahargarh Fort. Situated along sides of the Aravalli Hills range this park was closed for years, as it was a one of the chosen Rescue Centre of Rajasthan.  An Elephant Safari in Nahargarh Biological Park was recently created to endorse eco-tourism.

In June 2016 Ram Niwas Bagh Zoo or Jaipur Zoo was also shifted to this Park making it even better equipped with different flora and animal species. The construction of the park started in the year 2013 and was completed three years later.