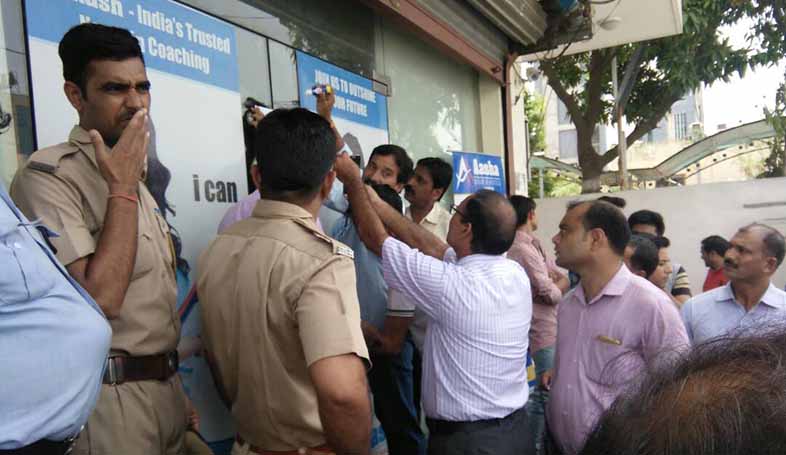 JMC officials pasting a notice on a coaching institute to keep it closed for three days.

Jaipur: Five prominent coaching centers in the city won’t be able to operate for three days as the JMC sealed their premises due to alleged violation of sanitation norms.

JMC officials said that Allen Career Institute, Career Point, Aakash Institute, Innovation and Spring Board are among the coaching institutes sealed for the violation of norms related to color-coded dustbins for waste segregation. The coaching institutes were also allegedly violating other norms including non-payment of lease money, UD Tax, sewerage and hording tax.

All the five institutes are situated near Riddhi Siddhi crossing on Gopalpura Bypass.

“We have been telling commercial establishments for the past several days to keep dustbins, but many of them have failed to comply,” said a senior JMC officer.

The officer said that as per the norms, commercial establishments have to keep color-coded dustbins for waste segregations.

“Small shopkeepers are mostly complying with these norms, but big traders and corporate houses are not, and it’s really very surprising,” said a JMC officer.

“They are falling behind on payment of urban development tax, lease money, hording tax and lease money,” Mayor said.

There were dustbins, but they were not following the color-code norm imposed by the JMC recently, the officer said. Garbage was spilling out of the dustbins lying outside, he added.

The officer said that the coaching institutes have been sealed for three days.

JMC is currently carrying out a drive against poly bags. They are also creating awareness about keeping color-coded dustbins.

JMC had announced earlier that traders who don’t put dustbins outside their shops will be fined Rs 2,000. The use of plastic carry bags can draw a fine of up to Rs 1 lakh.

JMC officials said that litter bins will be made available in all the markets.