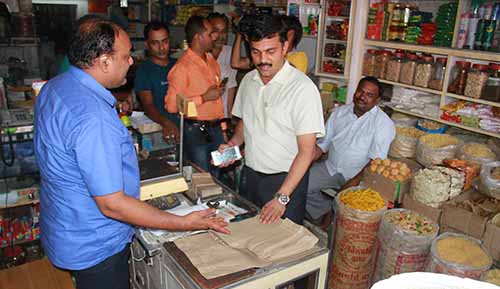 JMC launched a drive against plastic carry bags on Friday.

Jaipur: On the first day of the drive against plastic bags, the Jaipur Municipal Corporation (JMC) teams  seized plastic bags weighting a total of 151 kg and collected penalties to the tune of Rs 3.5 lakh. Four godowns that were storing plastic bags were sealed. JMC teams had to face protest from traders at some places including Sanganer. The drive went off peacefully at most other places and officials claimed that they got full cooperation from shopkeepers who placed dustbins outside their shops. JMC CEO Ravi Jain and other senior officials went from shop to shop and attempted to make traders aware of environmental hazard that plastic bags cause. “It was quite a great drive. To our pleasant surprise, traders throughout the city extended full cooperation to us. Traders placed dustbins outside their shops and even put up banners stating that they didn’t provide merchandise in plastic carry bags,” said Ravi Jain. He added that some traders even put up slogans such as ‘don’t embarrass by asking for plastic bags’. JMC had announced earlier that traders who don’t put dustbins outside their shops will be fined Rs 2,000. The use of plastic carry bags can draw a fine of up to Rs 1 lakh. The minimum storage capacity of dustbins should be 20 liters. The minimum limit is 100 liters for hotels, food joints, restaurants, tea stalls, vegetable venders etc. JMC officials said that litter bins will be made available in all the markets. Note: Want to share this story story with someone? Just click on the WhatsApp or Facebook icon below:
Follow @ThePinkcityPost