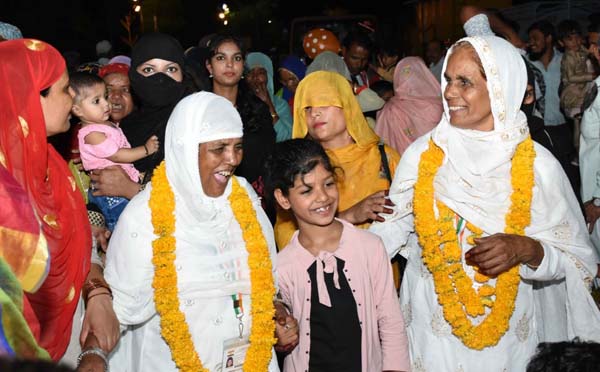 Jaipur: The first flight with 421 Haj pilgrims on board took off at 1.40 am on Thursday. The pilgrims will land in Madina at around 5.05 am. Rajasthan Haj Committee officials said all the arrangements have been made to ensure a safe and comfortable flight.

The youngest pilgrim is 1-year-old Alfiza Parveen, while the eldest one is Hameeda. Both are residents of Ajmer town. The Haj pilgrims first gathered at the Haj House. They were taken to the airport in low floor buses from there.

Of the total pilgrims, 325 werefrom Ajmer, 68 from Baran, 12 from Jaipur, 6 from Bhilwara, 2 from Dungarpur, 1 from Jaisalmer and 1 from Nagaur.

The second flight will take off on July 20. There will be a total of 18 flights between July 20 and August 1. The pilgrims will return between September 1 and September 12. Over 6330 pilgrims from Rajasthan will go on Haj pilgrimage this year.

The Haj is an annual Islamic pilgrimage to Mecca of Saudi Arabia, the holiest city for Muslims, and a mandatory religious duty for Muslims that must be carried out at least once in their lifetime by all adult Muslims who are physically and financially capable of undertaking the journey.