The police had to check out the owners of nearly 1200 bikes of similar make bought between 2007 and 2015 to identify the criminals. 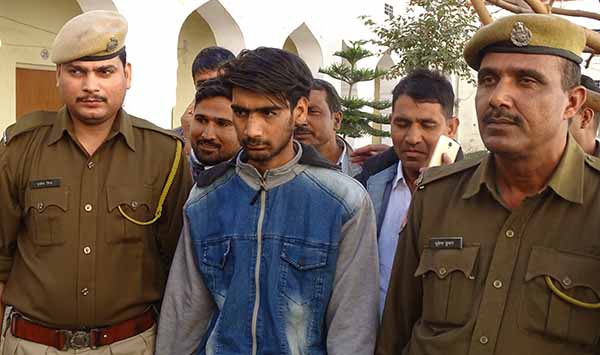 Jaipur: A week after a dairy booth cash collection agent was shot to death in Nandpuri area of Sodala, the city police on Monday arrested four men for the crime. The main accused is a dairy booth owner who included his three friends in their plan to rob the cash collection agent. The police reached the criminals through the bike that the criminals had used for the robbery. Some CCTV footages showed a part of the registration number. The police had to check out the owners of nearly 1200 bikes of similar make bought between 2007 and 2015 to identify the criminals. Police commissioner Sanjay Agarwal said that the men planned the robbery to get out of their difficult financial situation. When the victim, Omprakash Sharma didn’t let go of the bag, he was shot dead, said the officer.  The main accused, Ankit Saini, even tried to keep an eye on the police investigation on the pretext of helping the cops find the killers. The accused were identified as Subham Choudhary, Yash Singh, Sunil Kumar and Ankit Saini. Subham is a resident of Brahmapuri area. Yash belongs to Bihar, but was staying in a rented accommodation in Brahmapuri. Sunil is a resident of Joshi Colony in Brahmapuri, while Ankit a resident of Govindpuri in Sodala. “Ankit owns a dairy booth in Ramnagar area of Sodala. The victim, Omprakash, used to come to his booth to collect cash so Ankit was aware of his routine. Subham used to live in Govindpuri, Ramnagar, so he was a friend of Ankit. Ankit told Subham about the cash Omprakash collected from dairy booths and they prepared a plan to rob him,” said the officer. Subham and his two friends Yash and Sunil followed Omprakash while the latter collected cash from dairy booths for almost a month . “Ankit had told Subham that Omprakash didn’t collect cash on Sunday, so the amount of cash on Monday would be almost double. They planned the robbery on a Monday and executed it on January 8,” said the officer. Subham borrowed a sports bike from his friend. He, Yash and Sunil – armed with a baseball bat and a pistol - waited for Omprakash in a street in Nanandpuri. “When Omprakash didn’t let go of the bag containing the cash, they opened fire. Omprakash died,” said the officer. Ankit posted as Omprakash’s friend and kept an eye on the police investigation. “He pretended to be helping the police as he knew the victim. We were shocked when we found that he was the kingpin of this crime,” said the officer.
Follow @ThePinkcityPost