Bharat Vahini Party to field candidates at all 200 constituencies in Rajasthan: Tiwari

Tiwari who recently resigned from the BJP after his party was recognized by the Election Commission once again criticized Rajasthan chief minister Vasundhara Raje. 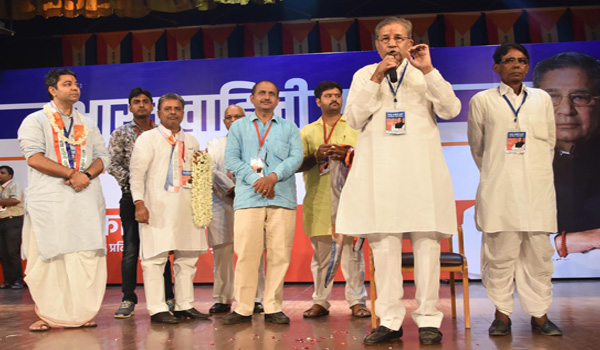 Jaipur: Senior politician and MLA from Sanganer constituency Ghanshyam Tiwari unveiled his Bharat Vahini party at Birla Auditorium in Jaipur on Tuesday. Four former MLAs, an ex-IPS officer, politicians and former bureaucrats were present during the function. Tiwari who recently resigned from the BJP after his party was recognized by the Election Commission once again criticized Rajasthan chief minister Vasundhara Raje. Without taking her name, he said that a “curfew-like situation” seems to be prevailing in the state if one looks at people who are at the helm of power. “In order to rejuvenate the cultural heritage of Rajasthan, we have floated this party. We will field candidates at all the 200 assembly constituencies,” Tiwari said. The party members appointed him as the president of Bharat Vahini. All the district members and presidents of the party’s assembly constituencies were honored. Senior politicians Shiv Kumar Saini, Ashok Yadav, Chhotu Lal Kumawat and Mahendra Meena were present. Former MLAs who attended the function included Dr Moolsingh, Narayan Ram Beda, Gulab Singh Rajpurohit and Dr Bhanwarlal Rajpurohit. Tiwari had recently sent his resignation letter to the BJP national president Amit Shah. Talking to the media persons in a press conference organized to announce his resignation, Tiwari lashed out at chief minister Raje, accusing her of acting in autocratic manner and said that the BJP will lose in the elections due to her. The BJP’s disciplinary committee had earlier sent a notice to him for his alleged ‘anti-party’ activities. Responding to the notice, Tiwari had said that people would never surrender before a ‘corrupt’ government. Under the banner of his organisation ‘Deendayal Vahini’, Tiwari has been touring the state and gathering support against the government.
Follow @ThePinkcityPost
Click on the following link(s) to find the latest & related stories on: Rajasthan assembly election - 2018