This is for the second time in the past 20 days that Poonia has been attacked. Earlier, he was attacked in Jaipur a day prior to the voting student union elections. 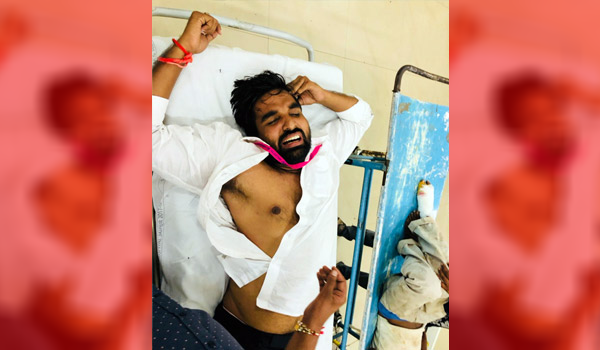 Jaipur: Unidentified men attacked NSUI State President Abhimanyu Poonia with iron rods and sticks in Sriganganagar district on Tuesday. Poonia got severe injuries on his legs and hands. The group of unidentified men managed to flee from the spot after the incident. Poonia was rushed to a local hospital and is undergoing treatment.

This is for the second time in the past 20 days that Poonia has been attacked. Earlier, he was attacked in Jaipur two days prior to the voting for student union elections.

Police have discovered CCTV footage of the area during investigation and on the basis of the victim’s statements, they have registered a case against seven men including Nitin Motyar, Vinod Bishnoi and Raju Jhuriya.

According to police, NSUI leader Abhimanyu Singh Poonia with his two others were returning to Hanumangarh after attending the demonstration organized in protest against the case filed on NSUI state secretary Ramu Chingpa.

An acquaintance intercepted them and asked them to stop their car. As soon as Poonia got out of the car, a Scorpio car stopped nearby and some unidentified men came out with covered faces and weapons in their hands.

They started to beat Poonia brutally with iron rods. Locals gathered on the spot during the incident but the accused managed to flee away in their car.

Poonia was rushed to a hospital with several injuries on his body. NSUI activists demanded the arrest of the accused by demonstrating at several places including Suratgarh and Gharsana. Police are in the search of accused. Further investigation is going on.

Earlier, he was attacked along with NSUI nominated candidate for President post Ranveer Singh Singhania before the polling for the student union election 2018 on August 29.