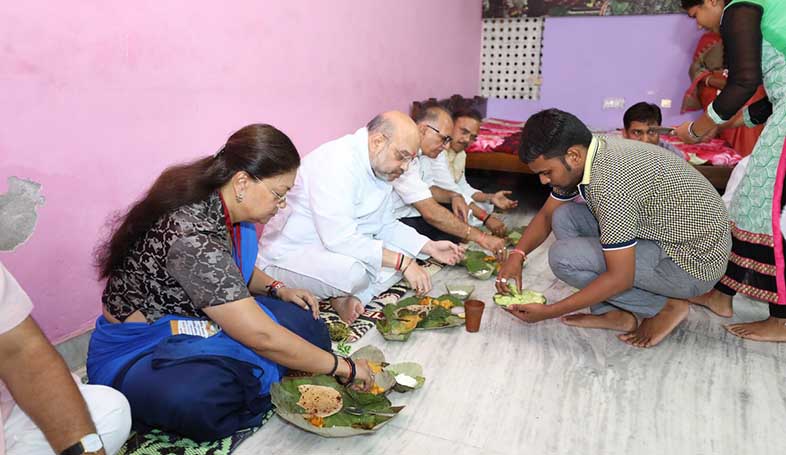 Jaipur: BJP national president Amit Shah and Rajasthan chief minister Vasundhara Raje on Sunday enjoyed Rajasthani bejad ki roti with bhindi ki sabji for lunch at the house of a dalit BJP worker Ramesh Pacharia in Jaipur. The dishes were served by Ramesh’s mother Biradi Bai. Though the move is being seen as the party’s attempt at wooing Dalit voters, senior BJP leaders said that the house was not selected because it belonged to a dalit, but because the owner of the house had been a dedicated BJP worker.

Jaipur mayor and BJP’s state spokesperson Ashok Lahoti told mediapersons that the house belongs to Biradi Bai whose late husband Damodar Balai was a decided party worker. “Damodar ji had been an active party worker and it was for this reason this particular house was selected. It has nothing to do with having lunch at a Dalit’s house,” said Shah. Shah and Raje were accompanied by BJP state president Ashok Parnami and several other senior party leaders in Rajasthan. The house is situated near Sushilpura government School on Ajmer Road. Women of the colony greeted Shah and Raje and sang songs. Girls drew a tilak on Shah’s forehead. The BJP national president offered two notes of Rs 500 to the girls as ‘shagun’. The food had been prepared by Biradi Bai. Both Shah and Raje were also praise for the delicious dishes which included Rajasthani bejad ki roti with bhindi ki sabji, Kadhai – Pakoda sabji and Podine Ki Chatani.

Shah had shared meal with Dalits in Varanasi also two months ago. The lunch was hosted by Bind family, and the food for the distinguished guests was prepared by the women of the family. Amit Shah is on a three-day visit to Jaipur. Related stories: Amit Shah goes all praise for Raje, puts to rest speculation on a change of guard in Rajasthan Jaipur: Rajasthan MP Sanwar Lal Jat suffers cardiac arrest during Amit Shah’s meeting with BJP leaders
Follow @ThePinkcityPost