Amit Shah goes all praise for Raje, puts to rest speculation on a change of guard in Rajasthan

Home » City Reports » Amit Shah goes all praise for Raje, puts to rest speculation on a change of guard in Rajasthan 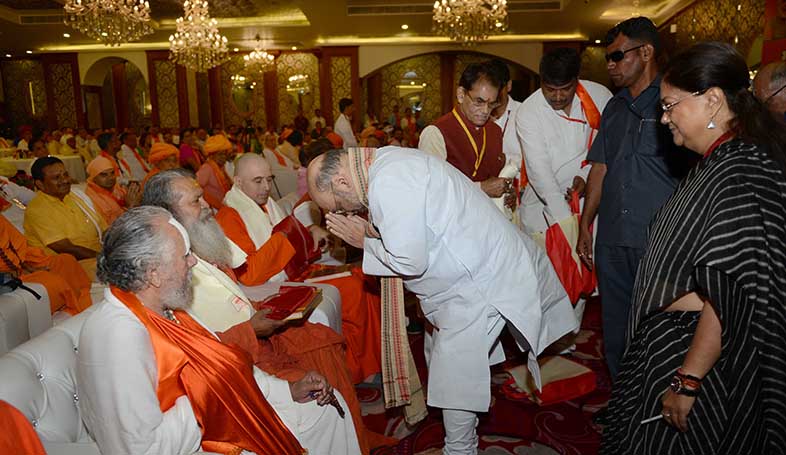 Jaipur: BJP national president Amit Shah put to rest speculations that a change of guard in Rajasthan was on the cards. He was all praise for the Vasundhara Raje government, making it clear to party leaders and workers that the assembly elections in the state, scheduled to take place next year, will be fought under her leadership.

Shah said that he had been getting great feedback on the Rajasthan government from all quarters for the past few months.  He hailed many public welfare schemes including Bhamashah, Jal Swalambhan Yojna and Nyay Aapke Dwar launched in Rajasthan since the BJP government came to power and said that they had had a great impact at the grass-root level.

“The governments at the center and in Rajasthan are working together towards growth and development. The feedback I am getting tells me that the party would be invincible at organizational level,” said Shah.

Shah added that the BJP had for the first time given people a corruption-free government under the leadership of Narendra Modi.

“Not a single corruption charge was levelled against us in the past three years, while scams – one after another – embarrassed the previous government,” said Shah adding that the transparency in the governance had made India the world’s fastest growing economy.

He attributed public welfare schemes launched by the Narendra Modi government and a strong leadership the growing popularity of the BJP in the country.

Shah said that the Rajasthan had received a financial assistance of Rs 1,49,211 crore from the center, which is more than what was allotted during the UPA government.

Shah is a three-day visit to Jaipur. He received a warm welcome when he landed at the Jaipur International Airport on Friday morning. He was received by many dignitaries including chief minister Raje and BJP’s state president Ashok Parnami.

Woman BJP workers showered rose petals on Shah when his cavalcade came out of the airport premises. On route to the party headquarters, he was greeted at eight different places. Traffic had to be diverted at several traffic points.

On Saturday, he met with Hindu seers and had breakfast with them. He collected their feedback and opinion on various issues including demolition of temples for Jaipur Metro, conservation of temples, school education for girls, female feticide, cow protection and Ayodhya temple controversy. Chief minister Raje was present when Shah was meeting the seers. The meeting went on for nearly an hour.