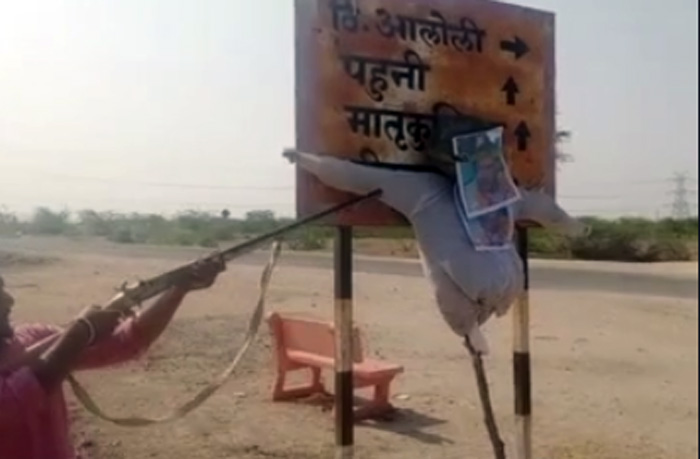 Youth shooting an effigy of Kataria

Jaipur: A video showing a youth firing at an effigy of Rajasthan's Leader of Opposition Gulab Chand Kataria went viral on Thursday. The youth vented his anger over Kataria’s alleged derogatory statement about warrior-king Maharana Pratap and issued a death threat. The youth said that he was firing at the effigy, but if Kataria was seen in his area, he would shoot the BJP leader on his head.

In a viral video reportedly made in Thikana Aloli of Sahada Tehsil, a youth is seen holding a gun. Some others were shooting the video and encouraging him. The youth said that they were from Thikana Aloli. He warned if Gulab Chand Kataria was seen in Aloli, his head will be shot in the same way. The youth then fired at Kataria’s effigy.

It was unclear whether the police have launched an investigation in the matter.

Kataia have tendered an apology over his statement about Maharana Pratap, but this has hardly helped pacify the Rajput community. A meeting of the Sarva Samaj was organized in Udaipur on Thursday. In the meeting, a resolution to demand resignation from Kataria was passed. April 18, a rally will be taken out. The rally will reach Kataria’s house and ask for his resignation. In Rajsamand, the Karni Sena has taken out a protest rally and demanded the removal of Kataria from the BJP.

Earlier, Rajput youths defaced Kataria's posters outside the BJP headquarters in Jaipur with ink and protested against him. They demanded from the BJP to sack him from the post of leader of the opposition.