Youth murdered after liquor party in Chitrakoot; friends under scanner 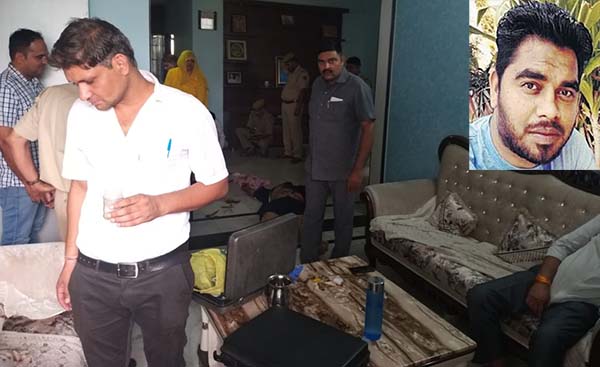 Sandeep (in inset) who was found murdered. FSL team at the flat.

Jaipur: A 28-year-old youth, identified as Sanddep, was found murdered at the flat of his friend in Sector – 6 near Chitrakoot Stadium on Thursday. The youth was stabbed and then strangled to death. It has come up during preliminary investigation that the victim had a liquor party with his friends on Wednesday night. The friends are suspected to have killed the victim in an inebriated state. The police have launched a hunt for the two friends.

The flat belonged to one Laxman Singh who lives in Dehli. Laxaman’s son Siddhartha, mother and wife stay in the Chitrakoot flat. Siddhartha’s mother was in Alwar, so he and his grandmother at the flat on Wednesday night.

Sandeep was a resident of Ajmer. He had come to appear in an interview at a private bank two days ago. T Siddhartha had invited Sandeep and another youth for a liquor party.  The grandmother was also in the house. She went to sleep. When she woke up in the morning, she found Sandeep lying in a pool of blood on the threshold of a room. She called for Siddhartha, but he was not in the flat. The elderly woman informed the neighbours who called the police control room.

“Siddhartha and his two friends including Sandeep were consuming liquor. It is suspected that they had a quarrel over something. Sandeep was first stabbed and then strangled. We conducted a postmortem examination of the spot after we were informed about the incident. Siddhartha and his friend who are suspected to be involved in the crime are missing. We have launched a search for them,” said a police officer.