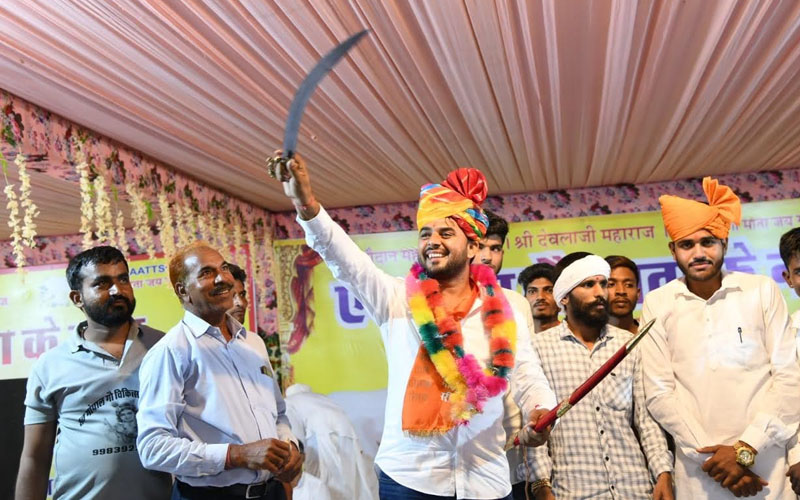 Jaipur: Prakash Bhakar – a young politician – has impacted the lives of hundreds of his fellow villagers in Jusri gram panchayat. In his late twenties, he has achieved what most seasoned politicians in his area couldn’t. It is due to his relentless efforts that Jusri of Makrana subdivision is Nagaur district is one of the most developed gram panchayats in Rajasthan.

Prakash Bhakar was born in a farmer’s family. He contested the election of Panchayat Samiti member in 2015 and won by a margin of 137 votes. It launched his political career. In 2020, he was elected Sarpanch as well as the president of Nagaur Sarpanch Sangh.

While being a Panchayat Samiti member, Bhakar donated three and a half bighas of his personal land to Devlaji Gaushala (cow shelter) and distributed ration, oxygen cylinders, masks, PPE kits, medicines for the poor in Makrana assembly constituency during the Covid-19 pandemic at his own expense. He has also distributed nearly 32,000 ayurvedic plants in his gram panchayat taking inspiration from Prime Minister Narendra Modi. He went door-to-door to inform people about their benefits.

In view of the shortage of blood and platelets after the second wave of Covid-19, Bhakar has been organizing blood donation camps in the area. He has donated lakhs of rupees to develop cow shelters, for development works in government schools, and to make drinking water more accessible to the villagers.

“I wanted to start early in social work. I joined politics because it gives you the opportunity to make a lasting impact on people’s lives,” said Bhakar.

He added that with the help of villagers, he has developed a road network in this village and planted trees on both sides. His village now has the feel of a tourist place.