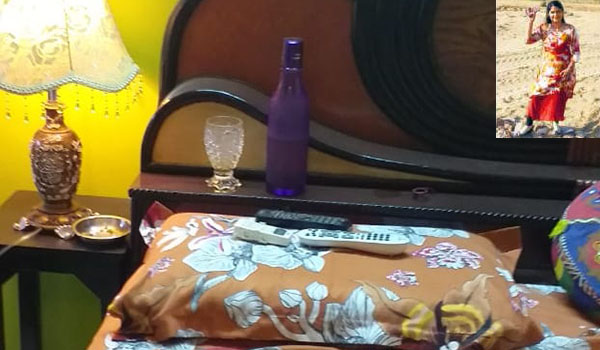 35-year-old woman Rajbala (in the inset) found murdered in her flat in Muhana.

Jaipur:  The city police suspects involvement of a close acquaintance in the murder of 35-year-old woman Rajbala whose body was found wrapped in a quilt in her flat in Muhana area on Friday morning. The police found glasses filled with liquor in the drawing room of the float. There was food in the frying pan in the kitchen suggesting that the victim was cooking for unknown guests before she was murdered.

The murder took place in Patel Nagar situated on Iskcon Road in Muhana. Rajbala was a resident of Jhunjhunu district and had come to Jaipur nearly 10 years ago. She was married off by her family members, but she returned to Jaipur and started living alone in the flat. She had allegedly separated from her husband and in-laws.

The neighbors informed the police about foul smell coming out of the flat situated on the second floor on Friday morning. The police team broke open the entrance gate and found the body of the victim wrapped in a quilt. Police suspect that she was murdered 5-6 days ago. She was last seen by the neighbors on April 30. When the maid came to the flat the next day, she found it locked.

The neighbors said that the woman’s activities were suspicious as a lot of different people used to visit her flat.

The police are studying the footages of the CCTVs installed in the apartment and in the neighborhood.