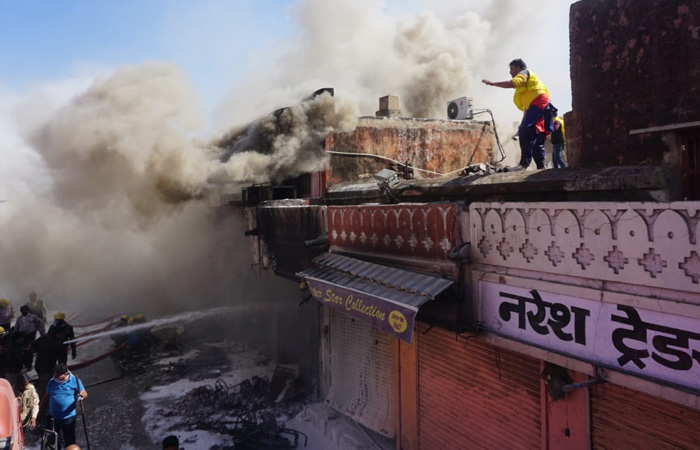 Jaipur: A major fire broke out at a firecrackers shop in Indra Bazar near Ajmeri Gate about 1.30 pm on Saturday. The fire caused firecrackers to burst. Soon, the fire engulfed at least five others shops in the vicinity. The incident created panic in the market as people rushed out of their shops hearing loud explosions. The efforts to control the fire were on till the reports last came in. There were no reports of loss of life, but properties worth lakhs of rupees were gutted in the fire.

The fire broke out at 1.30 pm. The shopkeepers informed the fire control room following which four fire tenders were rushed to the spot. The fire was controlled, but it again broke out after a few minutes. This time, it engulfed at least five shops and also some vehicles parked outside. People screamed for help and rushed out of their shops to save their lives.

“We have pressed more fire tenders and fire fighters into service. We are trying out best to control the fire and prevent it from spreading to other shops. We are still trying to determine what caused the fire. Our focus currently is on controlling it,” said a fire department officer.

The police stopped traffic on the road leading to Indira Bazar and cordoned off the area. Loud explosions could be heard in many markets of the Walled City.