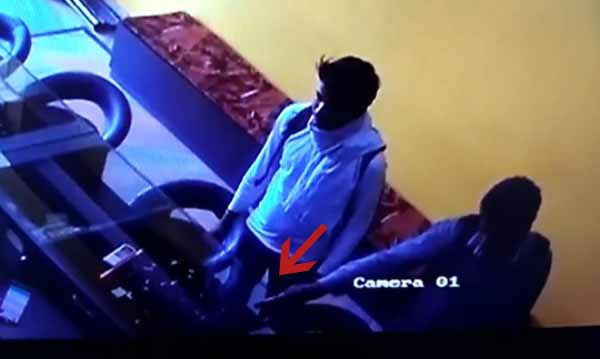 Video: CCTV footages of firing at jeweller by robbers at Jagatpura in Jaipur.

Jaipur: A jeweller, identified as Deshraj Yadav, is battling for life at a hospital after unidentified criminals barged into his jewellery shop at Mahadev Nagar Market near Ramnagaria Turn in Jagatpura and opened fire at him in broad daylight on Thursday. Pratap Nagar police suspect that it was a robbery attempt; however further investigation is going on.

The incident was caught on a CCTV installed inside the shop. The footages show two people walking into the shop. The man walking behind his accomplice was hiding a gun behind his back. They approached the jeweller and asked him to show them a gold chain. When the jeweller refused, the man carrying the gun shot at him. A bullet pierced the jeweller’s stomach, but he mustered courage and tried to chase the criminals who left the shop immediately. Deshraj Yadav collapsed to the ground outside his shop.

Senior police officers and a team from Pratap Nagar police station rushed to the spot after getting information about the shootout. The police are trying to identify the criminals on the basis of video grabs from the CCTV.

Jeweller Deshraj Yadav was alone in the shop when two men walked in. Both were carrying bags. According to preliminary reports, they asked Deshraj to show them a gold chain, but when he refused, one of the man opened firing at the jeweller.

Police suspect the involvement of three youths in the crime. They had come to the jewellery shop – JD Jewellers – on two bikes. While two entered the shop, one stayed outside to keep an eye on passers-by.

The CCTV footages show the jeweller holding the bullet wound on his stomach and trying to chase the criminals. When people saw him collapsed to the ground in a pool of blood, they informed the police.

“We are trying to identify the criminals. It was apparently a robbery attempt; however, we can’t rule out other possibilities. Further investigation is going on,” said a police officer.