Uttam vs. Amit in RU: NSUI and ABVP declare candidates for president post 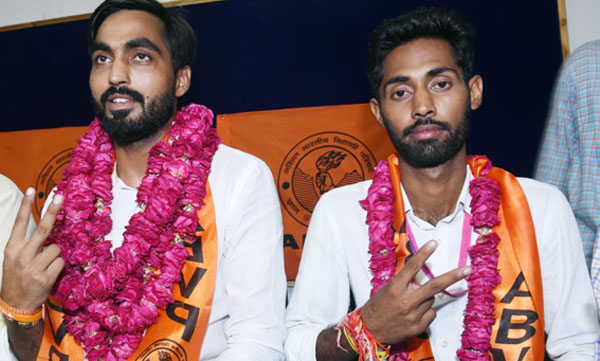 Jaipur: NSUI and ABVP have declared their candidates for the post of president the upcoming Rajasthan University student union elections 2019. The fight will be between Amit Kumar Badbadwal of ABVP and Uttam Choudhary of NSUI. Amit had been the president of Law College student union.

ABVP declared the candidate for the post of vice president also. Deepak Kumar will fight the election for this post from ABVP. The BJP-backed student union will declare the candidates for the posts of general secretary and joint secretary on Wednesday.

NSUI will declare candidates for the posts of vice president, general secretary and joint secretary on Wednesday.

The final voter list has also been released by the university administration. There will be 23,853 voters. The university has seen an increase of 1176 voters compared to the last year.

While the total number of UG and PG students is 23,526, there are 291 research students in the university this time. Nearly 6500 students will cast their votes in the student union elections for the first time.

“I am very excited. I am a first-time voter. I will cast my vote in the favor of student leaders who will promise to help girl students,” said Abha Morya, a Maharani College student.