The accused have been identified as Sher Singh Jatav (22) and his aide Ashok Jatav (22), residents of Laxmangarh in Alwar. 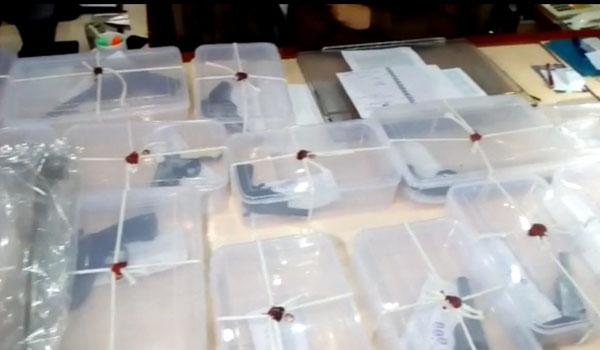 Jaipur: Jaipur police arrested two arm smugglers and seized 15 pistols and 12 live cartridges from their possession in Amer area of the city on Thursday.

The accused have been identified as Sher Singh Jatav (22) and his aide Ashok Jatav (22), residents of Laxmangarh in Alwar.

According to DCP North Satyendra Singh, a total of eight pistols were seized from the possession of Sher Singh and seven from Ashok. Eight live cartridges were also recovered from Ashok.

After the enforcement of the model code of conduct in the state ahead of the assembly elections, the police officers were instructed to take strict action against those who are found to possess illegal arms and weapons.

The police officials came to know a factory of illegal weapons is being operated in village Jawali in Laxmangarh of Alwar district. The illegal weapons are being smuggled to Jaipur from the factory.

Officials received a tip-off that the two men are smuggling weapons to Jaipur. A trap was laid and the officials arrested the duo.