Three arrested for robbery with bank cashier in Kota

The mastermind was a contractual employee of the bank who was riding pillion with the victim when two bike-borne robbers snatched away his bag containing Rs 8 lakh. 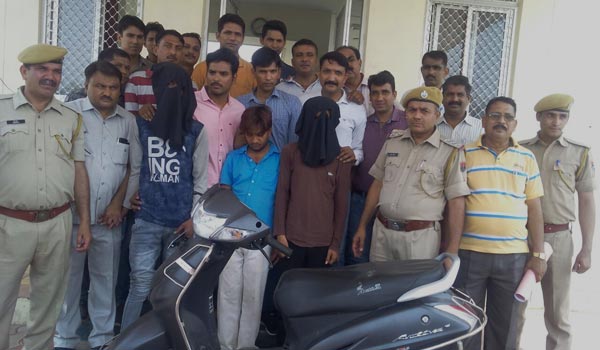 Three arrested in robbery with bank cashier in Kota

Jaipur: Three days after the cashier of a bank was robbed of Rs 8 lakh, the Kota police on Friday cracked the case and arrested three men. The mastermind was a contractual employee of the bank who was riding pillion with the victim when two bike-borne robbers snatched away his bag containing Rs 8 lakh. The accused, Devprakash was under huge debts and hatched the plan to rob the cashier along with his two friends to pay off the debts, police officials said.

SP Kota Anshuman Bhomia said that the robbery took place in Anantpura police station area of Kota on June 19. Gyarasi Lal, the cashier of Baroda Rajasthan Kshetriya Gramin Bank (Kansua) was on his way to deposit Rs 8 lakh at the chest branch of the bank along with his colleague Devprakash Meena. Near Bhamashahmandi overbridge, his bike was intercepted by another bike. Two men riding on the bike snatched away his bag containing Rs 8 lakh and drove away.
The police registered an FIR and launched an investigation. The cops collected evidence from the spot and studied footages of CCTVs installed in the area.

“The names of two suspects Arun Kumar Khateek and Rahul Rathore came up during investigation,” said the officer.
The officer added the robbers used a Honda Activa in the robbery. Both were rounded up and interrogated. They allegedly told the police that Devprakash Meena who was riding pillion was the mastermind of the robbery. He hatched the plan to rob the cashier. He promised the duo a 50% share in the booty.

Devprakash was working with the bank as a contractual employee since 2013, so he was familiar with the entire process of money transfer from the bank to the chest branch.

“He was under debts, so he needed money. He planned the robbery so that he could pay off his debts,” said the officer.

All the three accused have been arrested. The police have also seized the vehicle used in the robbery.

Further interrogation with them is going on,