Jewellery and other valuables worth more than 50 lakh were stolen from a jewellery showroom at Gopalpura Chauraha in the city late on Thursday night. 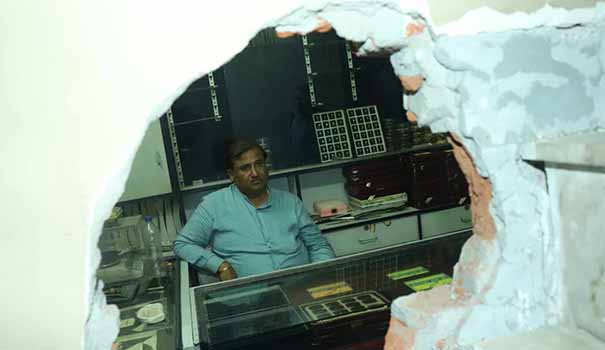 Jaipur: Jewellery and other valuables worth more than 50 lakh were stolen from a jewellery showroom at Gopalpura Chauraha in Jaipur late on Thursday night. The burglars dug up a hole in the wall of the showroom housed in the second floor of a building and made away with the valuables.

The police have got footages of CCTVs installed at other shops in the area. The footages show at least three burglars leaving the area after committing the theft. The burglars remained in the showroom for at least two hours.

The showroom is owned by jeweller Harish Sahgal, a resident of Shanti Nagar. HE said that he had closed the showroom on Thursday evening. He was informed about the theft by his cashier on Friday morning.

The police found rope and other equipment used in climbing.

The burglars then dug up a hole in the wall of the showroom and stole 500 gram of gold and 70 kg of silver. The CCTVs installed in the shop were defunct, but the police got the footages from CCTVs installed at nearby shops.

The police suspect the involvement of someone known to the jeweller.