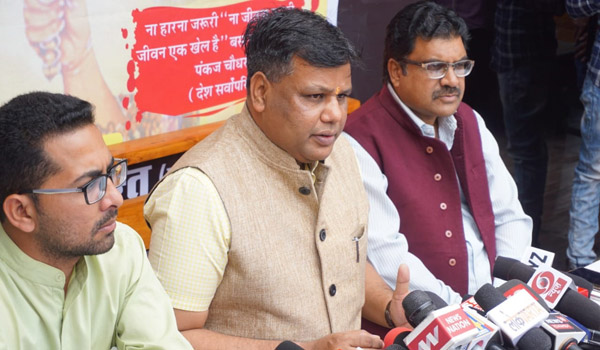 Jaipur: Election Commission issued a certificate to terminated IPS Officer and BSP Candidate Pankaj Choudhary on Tuesday which will now enable him to fight the upcoming Lok Sabha elections. Choudhary will file his nominations from Bikaner Lok Sabha seat.

Pankaj Choudhary moved the state high court on Friday after his nomination paper from Barmer-Jaisalmer seat for upcoming elections was rejected by Election Commission.

He requested direction to the election commission from court to issue him the certificate.

Lok Sabha 2019 polls on Barmer seat are scheduled for April 29 and the nomination process has already been over for it. Choudhary now wants to contest elections from Bikaner seat for which he demanded the certificate from election commission at earliest that will enable him to contest the elections.

Bikaner constituency will go on polls on May 6. The last day of nomination for the seat is April 18.

Election Commission rejected the nomination form of Choudhary on Wednesday on the grounds that he did not attach the letter of termination from his services by government or permission certificate from EC with his nomination form.

According to the rules, no officer can contest the election after being terminated by central or state government from his/her services due to any reason. The officer didn’t permit for the same before filing his nomination.

Pankaj Choudhary’s advocate Ramvatar Singh said that Pankaj was terminated from IPS on the charges of the extramarital affair and not for corruption or disloyalty for the state. He must get the certificate from the election commission to contest the elections under Section 33 of the Representation of People Act, 1951.

The court directed the election commission officials to decide on Choudhary’s application and revert by April 16 to the court.