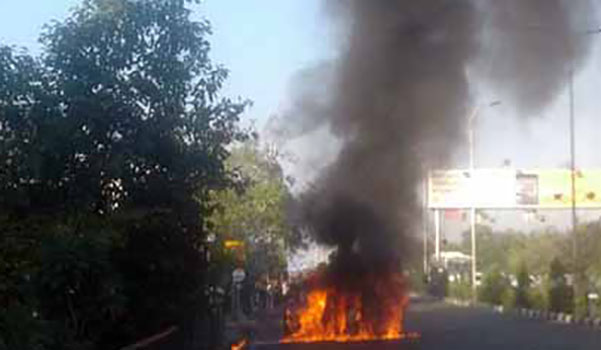 Jaipur: Some men set a priest on fire in Sapotara area of Karauli district on Wednesday. The priest, identified as Babulal Vaishnav, was undergoing treatment at SMS Hosptial in Jaipur and succumbed to burn injuries on Thursday. The priest was murdered allegedly after he objected to an encroachment attempt on the temple land. The police have arrested the main accused, identified as Kailash Meena, while search for some other men is going on.

Rajasthan chief minister Ashok Gehlot said in a tweet, “the incident was unfortunate and there is no place for such a heinous act in our society. Our hearts goes out to the family members of the victim. The justice will be swift and culprits won’t be spared”.

Babulal Vaishnav was the priest of Radhakrishna temple in Bukana village of Sapotara area. The temple land had been donated by the villagers.

According to the family members of the victim, the main accused – Kailash Meena – along with some other people including Shankar, Namo, Kishan and Ram Lakhan was trying to encroach upon on the temple land. The priest first registered his protest with the community panchayat which favoured him.

When the priest continued to protest, the accused men poured petrol on him and set him on fire.

Union minister Prakash Javdekar said that a priest was set afire in Karauli. There had been rape incidents in Rajasthan. In such a scenario, Rahul Gandhi should stop going on political tours and turn his attention to the issues of this Congress-ruled state.