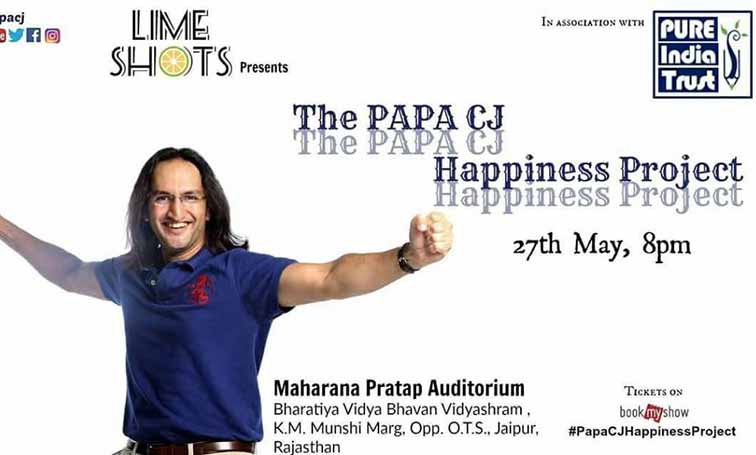 Papa CJ to perform for underprivileged children at Vidhyashram Auditorium in Jaipur on May 27.

Jaipur: When it comes to charity work, you get to hear lots of sad stories. But after attending this event in Jaipur on May 27, you will learn to take everything in stride and do your part in making the world a bit more cheerful place to live. If you want to bring smile to the face of underprivileged kids, you must attend the comedy show by Papa CJ at Vidhyashram Auditorium.

But who the heck is Papa CJ?

Well, he is a world renowned stand-up comedian. Papa CJ has won awards for both Asia and India’s Best Stand-up Comedian. He has done over 2000 shows in more than 20 countries and was the first comedian from India to perform at the Just for Laughs Festival in Canada, the Melbourne International Comedy Festival, the Edinburgh Fringe etc.

Papa CJ is coming to Jaipur to raise funds for underprivileged children through this event to be organized on May 27.

“Under the project, he performs for free to raise money for charitable causes across India. He is doing many such shows across the country for a range of different causes,” he said.

“LimeShots is organising this event for us. We are expecting more than 750 people to attend the event as Papa CJ is a class one stand-up comedian,” said Prashant Pal.

He said that the organizations are selling the tickets of the event on the BookMyShow to raise money for underprivileged children. Want to attend? Call Prashant – 09212102580.