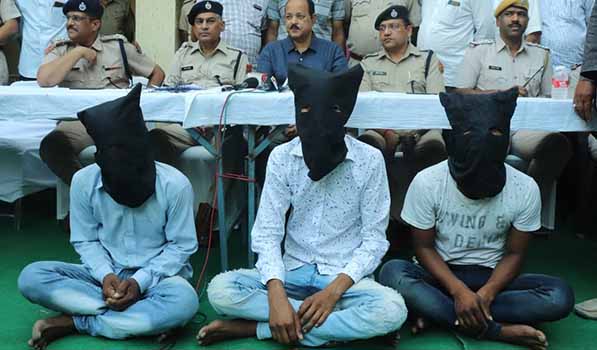 Three robbers who were arrested for the loot at the house of businessman in Brahmapuri.

Jaipur: Four days after unidentified men robbed valuables worth crores of rupees from the house of a businessman after tying up the domestic help, the Brahmapuri police have arrested three men for the crime. One of the accused is the son of the domestic help.

While the two robbers tying up the servant, his son was outside the bungalow waiting for his aides. The police arrested the accused men from Dausa where they were staying in a rented accommodation and recovered most of the booty.

The robbery had taken place at the house of businessman Shikhar Chand Jain situated near Dashhara Kothi on May 22. The businessman and his family had left home to visit a temple when two robbers posing as plumbers entered the house.

They overpowered Ghanshyam, tied him up and made away with jewellery and cash worth crores of rupees.

The police arrested Kaluram alias Jitu, Krishna Kumar Sharma and Rajesh Kumar, residents of JDA Colony in Sanganer. Krishna Kumar is the son of Ghanshyam Sharma who worked as servant at the businessman’s house. Krishna Kumar had also worked at the house for a few months, but quit nearly a year ago. He was working as a mini bus conductor.

The cops managed to identify the robbers on the basis of CCTV footages. The cops got to know about their location in Dausa with the help of mobile surveillance.

The trio was arrested and the booty was recovered.

“Krishna Kumar was waiting outside while Kaluram and Jitu entered the bungalow posting as plumbers. After they came out, Krishna Kumar drove them away on a bike,” said a senior police officer.