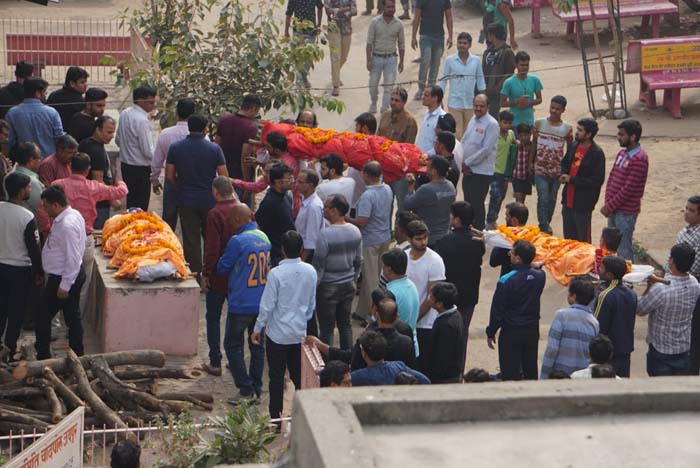 Bodies of three victims from Jaipur who were killed in a road accident in Sikar on Friday were cremated.

Jaipur: A day after three members of a family including a couple and their 8-year-old son were killed in a tragic road accident in Fatehpura area of Sikar district, their bodies were cremated on Saturday.

Nitin Nevar (41), his wife Sapna Nevar (39) and their son Darsh were among the four victims who were killed in the mishap in Fatehpur area. Their family members were inconsolable when their bodies were consigned to flames.

According to reports, Nitin was an engineer, while Sapna was the head of economics department in St Xavier’s College. The other son of the couple – Tanay – was also injured in the mishap. They were in a Maruti Swift car when it collided with an SUV on Jaipur-Bikaner National Highway on Friday.

The fourth victim who was killed was riding in the SUV. She was identified as Pushpa, a resident of Bikaner. One Omprkash and Pushpa’s husband Ratanlal were injured. Omprakash is the secretary of Rajasthan Bicycle Association, while Ratanlal a member.

According to the family members, Nitin was on his way to Punjab with his wife and two sons to attend a wedding function. Nitin and Sapna were to celebrate their wedding anniversary on Saturday.