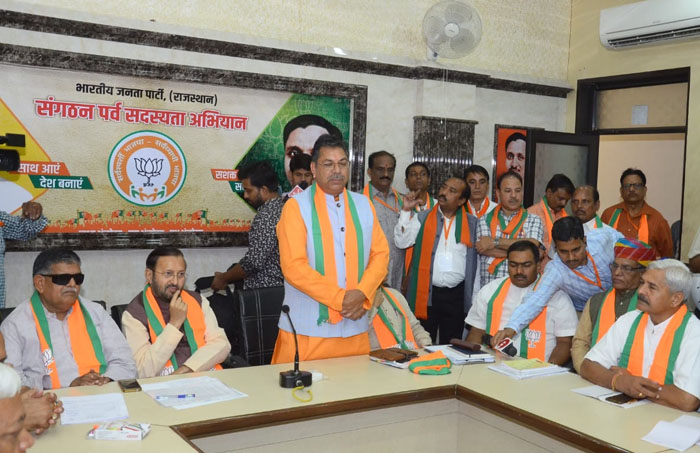 Jaipur: Senior BJP leader Satish Poonia officially assumed the charge of Rajasthan BJP president in a function held at the BJP headquarters in Jaipur on Tuesday. Former chief minister Vasundhara Raje was conspicuous by her absence from the function; however, she sent her congratulatory message in writing which was read out during the ceremony. Many senior BJP leaders attended the function.

In her message, Raje hailed Poonia’s skills as an organizer and said that he has the image of a hardworking and honest member of the BJP family.

“I am confident that you will carry forward your duties and meet the expectations of the party workers and public... I wanted to attend your ceremony, but couldn’t do so because I needed to attended already-scheduled navratri functions.... I wish you all the best,” Raje’s message read.

Satish Poonia assumed the charge amid sloganeering and cheers by his supporters and party workers. He offered prayers before assuming the office at the BJP headquarters with his wife, son and daughter.

The post of Rajasthan BJP state president has been lying vacant for the past two and a half months since the death of Madan Lal Saini on June 24. Satish Poonia was appointed the Rajasthan BJP chief by the party high command last month. Poonia, who hails from Churu district, is 55-year-old, one of the youngest BJP presidents ever. Poonia's father Subhash Chandra Poonia was the head of the Rajgarh Panchayat Samiti of Churu. Poonia holds BSc, MSc, LLB and PhD degrees.