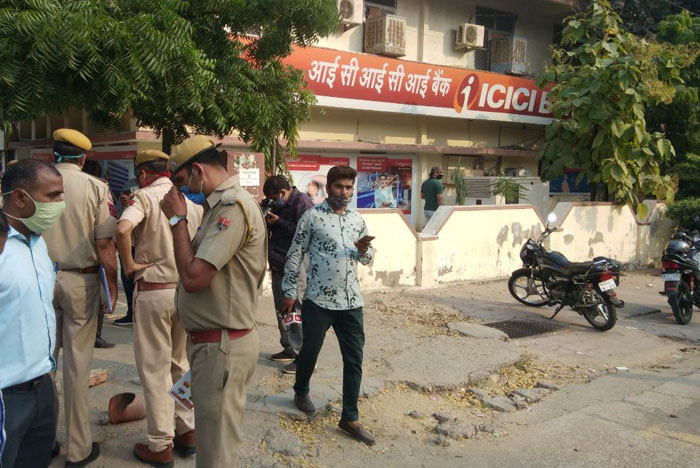 Jaipur: Some robbers in a car fired at a security guard outside ICICI Bank’s branch in Mansarovar RIICO industrial area to rob a box containing cash. It is believed that the robbers made away with Rs 26 lakh; however, it is yet to be confirmed. The cash was being transported from bank to an ATM machine. The guard was carrying the box containing the cash when the incident took place.

DCP South Manoj Kumar and several other senior police officers rushed to the spot. Barricades were put up and police petrolling was stepped up across the city as in yet another robbery in which gold and siliver jewellery worth Rs 90 lakhs were looted in Benad Road area of Muralipura.

The robbery in Mansarovar took place around 2.10 pm. A van used in transporting cash from the branch to the ATM was parked outside the bank. The employees walked out of the branch to transport the cash when some robbers reached there in a car. They fired three bullets. One of the bullets hit the security guard who was sitting in the van. The robbers snatched away the box containing the cash and sped away.

The police are yet to identify the robbers. Senior police officers said that further investigation is going on. Prima-facie, there was no evidence to suggest that Benad Road robbery and Mansarovar robbery were carried out by the same gang of robbers; however, the cops are looking into this possibility.