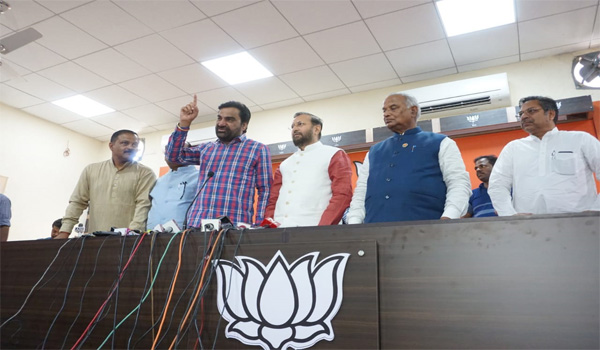 Jaipur: Rashtriya Loktantrik Party (RLP) leader Hanuman Beniwal announced to form an alliance with BJP party for the upcoming Lok Sabha elections 2019 on Thursday. The announcement was made in a press conference attended the BJP leaders including Prakash Javedkar and Madanlal Saini.

Prakash Javedkar said that Hanuman Beniwal will contest upcoming elections from Nagaur from his party. The BJP will not field its candidate there.

The BJP is yet to release the names of its candidates for five Lok Sabha seats in Rajasthan, while the Congress has announced candidates for all the 25 seats.

Beniwal told media persons that the Congress has been misguiding people for years, so he was joining the BJP to stop it from coming to power. “Our aim is to bring back Narendra Modi as our Prime Minister in 2019,” said Beniwal.

Independent MLA from Khinvsar constituency Hanuman Beniwal floated his party in October 2018 before the Assembly elections 2018 and named it ‘Rashtriya Loktantrik Party’.

Beniwal had won in 2008 on a BJP ticket but was suspended from the party in 2012 due to differences with then CM Vasundhara Raje. In 2013, he contested as an independent from Khinvsar and won.

The official announcement was made at the Congress’s Jan Sabha rally in Jaipur at Ramlila Ground where Rahul Gandhi addressed a booth level sammelan of party workers.

Tiwari told media persons that for the sake of democratic values, he decided to join the Congress. Tiwari will not contest the Lok Sabha polls but will serve as an active member of the Congress during the election campaign.