Record rainfall throws life out of gear in Jaipur; 4 killed 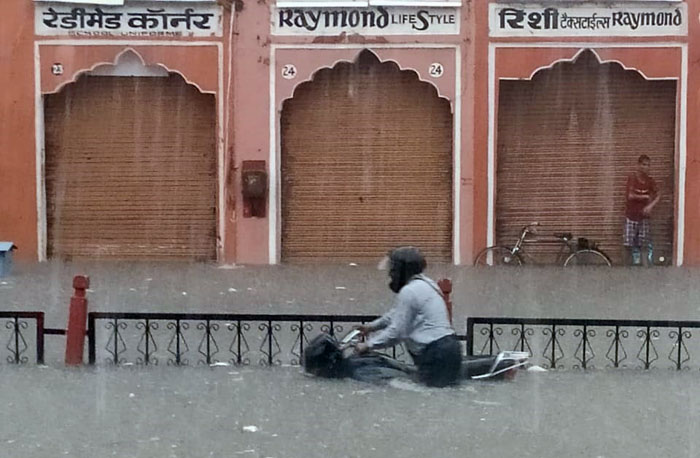 A biker stranded in Walled City.

Jaipur: The city witnessed heavy rainfall for 10 consecutive hours on Friday. Four people are believed to have been killed, while two others are witnesses. Many low-lying areas – particularly in the Walled City – witnessed flood like situation. While shops and homes were flooded, dozens of vehicles are learnt to have swept away. Some houses also caved in.

The city recorded about 10 inch rainfall – the highest in the season. The life came to standstill as all the major roads and markets were inundated. The people had to take the day off and didn’t venture out even after the rain stopped due to the fear of getting stranded in the rain water.

An SUV swept away in the rainwater near Kanota Dam. There were six passengers in the car. Three were killed, while three others were rescued. A man was found floating in rain water in Kho Nagaurian area. A child is learnt to have been swept away in Jaisingpura Khor. A man is missing in Sodala also.

State Disaster Relief Force (SDRF) teams were deployed at the most affected areas.

The worst affected areas were the Walled City and Sanganer. Many people were stranded as shops and houses were flooded by rainwater.