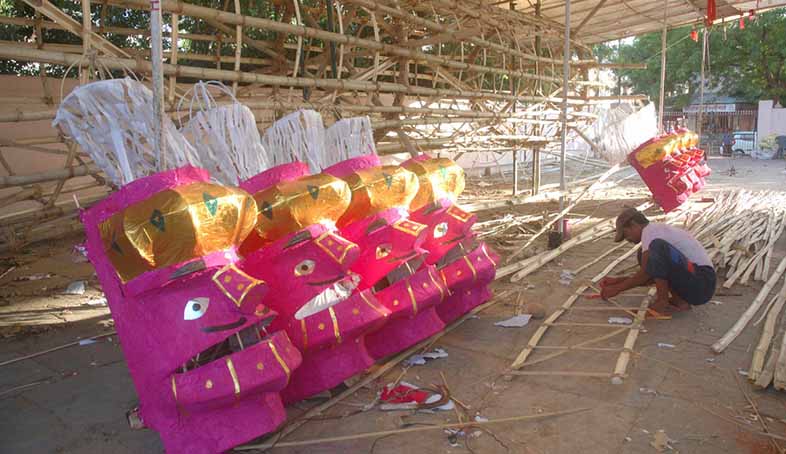 Dussehra in Jaipur: Effigy makers bear the brunt of GST.

Jaipur: Dussehra is round the corner. While Jaipurites are excited about the festival to be celebrated on September 30, it is the effigy makers of the city who are fuming with the introduction of GST that has impacted their profession. The new tax system has increased the cost of materials needed to build these effigies. Unlike before, the heights of these effigies will now have to be limited since the costs to build these have increased.

The festival is celebrated in honor of Lord Rama. Many plays based on the Ramayana and Ramcharitmanas (Ramlila) are performed at outdoor fairs across the country and in grounds featuring effigies of demons Ravana, Kumbhakarna, and Meghanada. These effigies are burnt on bonfires in the evening of Dussehra signifying Lord Rama’s victory over the demon Ravana. This also symbolizes the victory of good over evil.

A cane and bamboo structure forms the skeleton of an effigy. The craftsmen then work to create the bamboo wire-frames which form the base.  Cloth or paper is glued over the bamboo wireframe to create the skin of it and then painted to give it color. The massive faces of these effigies decorated with paint and metallic paper to create the facial features of the demon king. The many heads of Ravana are filled with gunpowder and explosives and set ablaze for a splendid show. Costs of all these items have now increased with applicable GST.

The height of these effigies used to be between 4 ft to 51 ft. With the increase in costs, there have only been orders to make small or medium size effigies. Many small and medium businesses had recently started to stabilize after the impact of demonetization, however, the GST has added another complexity created more challenges for the unorganized sector, particularly for those dealing in lower-priced items. Majority of the effigy makers in the state are from Jodhpur, Ajmer, Jaisalmer, Abu, and Bilara.