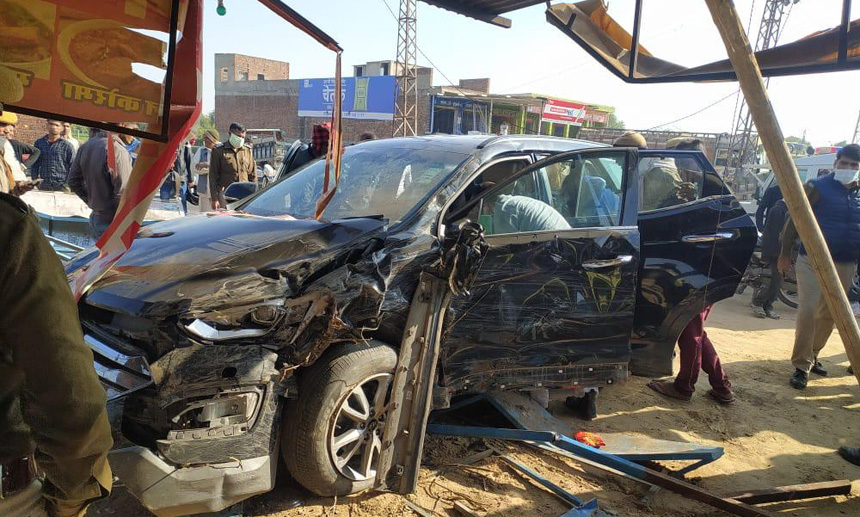 Jaipur: Former Indian cricket team captain and Congress leader Mohammad Azharuddin had a narrow escape after the car he was travelling in overturned before it rammed into a hotel near Surwal in Sawaimadhpur district on Wednesday. Azharuddin and three other people were on their way to Ranthambore Tiger Reserve when the mishap occurred. The ex-skipper escaped unhurt in the mishap; however, an employee of the roadside hotel was slightly injured, according to preliminary reports.

It is believed Azharuddin along with some other people were visiting Ranthambore for a tiger safari. There were four people in the car. Prima-facie, it seems tyre burst caused the mishap. The car overturned a couple of times after landing on the wrong side of the road and then rammed into a roadside hotel.

The car was completely damaged, but Azharuddin and other passengers escaped unhurt as the airbags deployed. An employee of the hotel is said to be injured in the accident.

A police team immediately rushed to the spot after the locals informed the police control room. Azharuddin and others were taken to a hotel after a medical examination. The police have launched an investigation.

Azharuddin has fought parliamentary elections on a Congress ticket twice. While he won from Moradabad seat of Uttar Pradesh, he faced defeat in Tonk-Sawaimadhopur constituency of Rajasthan. Azharuddin was Indian cricket team captain from 1989 to 1999.