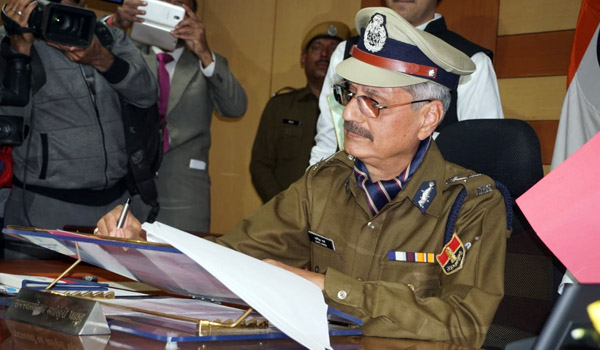 Jaipur: Just five days before the current Director General of Police Kapil Garg is due to retire, the Rajasthan government sent the names of 10 senior most IPS officers to UPSC in compliance with a Supreme Court order. Those are in the list of names as possible candidates for the top post include Alok Tripathi, NRK Reddy, Bhupendra Yadav, Rajeev Dasot, BL Soni and ML Lathar.

Six senior IPS officers are in the race for the DGP post. DGP Kapil Garg will retire on June 30. The two who are the strong candidates to replace Garg are Bhupendra Singh Yadav and Alok Tripathi.

The department of personnel is learnt to have sent the names to the UPSC on Tuesday. The state government wants to avoid any legal troubles by violating the Supreme Court guidelines in this regard.

The Rajasthan government had faced flak for not complying with the Supreme Court guidelines when Kapil Garg was appointed DGP on November 30, 2017. Garg had replaced OP Galhotra. The state government didn’t send the names of the senior most IPS officers to the UPSC at that time. The state government is supposed to select DGP from from the three senior-most officers empanelled by the UPSC and the selected person given a two year tenure, apart from other procedures.

The Gehlot government’s move also violates the Rajasthan Police’s law formulated to sync with the SC directive on police reforms. As per Rajasthan Police Act’s Section 13 (3), the DGP shall have “minimum tenure of two years

A 1983-batch IPS officer, Garg was appointed DGP, Rajasthan after the Congress government came to power. He was the chairman of Police Housing and construction Corporation during the Vasundhara Raje government.