Raje discussed the BJP’s strategy for bypolls in three constituencies. 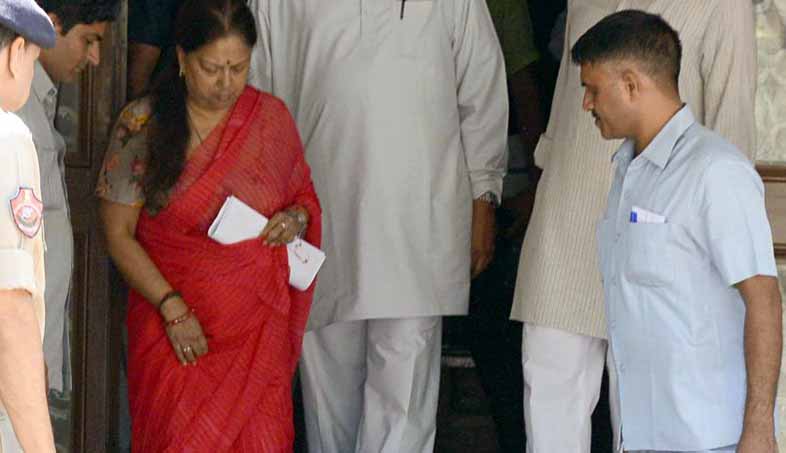 While there were reports that Bhagwat will refrain from political activities during his Jaipur visit, his meeting with Raje has triggered many speculations. Holding some papers in her hand, Raje reached Bharati Bhavan to – as many in political circles believe – discuss BJPs’ strategy in the upcoming bypolls for two parliamentary and one assembly constituencies in Rajasthan.

It seems the criticality of the political situation in Rajasthan is being understood and addressed by the ruling party and others concerned. With the untimely death of three state stalwarts and by-polls looming large, none of the bigwigs seem to be taking the situation lightly. The high-end meeting definitely seemed the need of the hour for the ruling state party.

The unfortunate deaths of Alwar MP Chand Nath and Ajmer MP Sanwar Lal Jat as well as that of Mandalgarh MLA Kirti Kumari has somewhat changed the political dynamics of the state. The upcoming by-polls to fill up these vacant seats have thrown up the challenge wide open to Congress as well as BJP. The ruling party will not want to lose ground and hence seems aware about the task lying ahead.

At a time when the cow vigilante incident of Alwar has been making headlines all over the country, this meeting seems of great importance as RSS and BJP clearly recognize the possibility of losing the political stronghold to their biggest political rival party. The RSS chief made his views clear and expressed his views about the Alwar incident by stating, “People who revere cows devote themselves to rearing cows. They do not resort to violence even if their sentiments are deeply hurt.”

One of the biggest challenges for the ruling party is finding suitable candidates for the bypolls.

“BJP’s Rajasthan unit fully appreciates the fact that the central leadership will closely observe the party’s performance in the by-polls. If anything goes wrong, it may have substantial impact on the BJP strategy for assembly elections which are scheduled to take place next year,” said a source in state BJP.