BJP headquarters put up an electronic signboard, saying that they were ‘bhav vibhor’ over the demise of the statesman. In literal translation, ‘bhav vibhor’ stands for being overwhelmed. 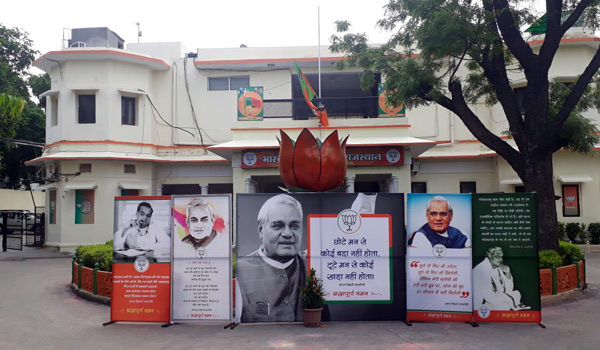 Signboards put up at BJP headquarters in Jaipur to pay tribute to Atal Bihari Vajpayee.

Jaipur: Rajasthan is mourning over the demise of former prime minister Atal Bihari Vajpayee and Bharatiya Janata Party (BJP) workers are expressing their grief nationwide, but the party headquarters in Jaipur made a blunder which receives a torrent of ridicule. They put up an electronic signboard, saying that they were ‘bhav vibhor’ over the demise of the statesman. In literal translation, ‘bhav vibhor’ stands for being overwhelmed with delight. A program was organized at the BJP headquarters in Jaipur to pay tribute to late Atal Bihari Vajpayee. A message was flashed on the signboard in the event and it mentioned that they are ‘bhav vibhor (overwhelmed with delight)’ over Vajpayee’s death. The message which was written on the signboard during the event “Purva Pradhan Mantri Shri Atal Bihari Vajpayee ke nidhan par hum sab bhaav vibhor kaaryakarta shradhanjali arpit karte hain.” People ridiculed the message as it used a completely wrong word. As per the dictionary definition, ‘Bhaav Vibhor’ is the word used for a joyful event or the emotion of overwhelming pleasure. Atal Bihari Vajpayee passed away at 5:05 pm on Thursday. He was admitted to AIIMS (All India Institute of Medical Sciences) on June 11 and was suffering from urinary tract infection, lower respiratory tract infection and kidney problems. He has been on the life support for past two days.
Follow @ThePinkcityPost